INDICTED & ARRESTED: But Attorney for Mike Hogan says his client ‘did not commit any crimes’

COMES AFTER KENTUCKY STATE AUDITOR REPORT THAT BEGAN IN SPRING 2020 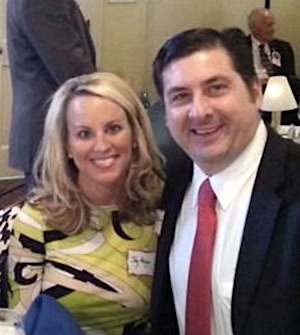 ATTORNEY FOR LAWRENCE COUNTY MIKE HOGAN, AND HIS WIFE JOY,  INDICTED LAST WEEK BY FEDERAL GRAND JURY ON SEVERAL COUNTS OF WIRE FRAUD,THEFT FROM A FEDERAL PROGRAM, WITH WIFE INDICTED ON ONLY ONE, BUT SERIOUS WIRE FRAUD COUNT.

On Thursday, June 3, 2021, the five term Attorney for Lawrence County, Michael Todd Hogan, 53, and his wife, Joy M. Hogan, 41, of Louisa, were indicted by a federal grand jury U.S. court in Lexington, Kentucky.

In addition, Michael Hogan, and his wife, Joy Hogan, who is also her husband’s Legal Secretary, have been federally indicted with one count of conspiracy to commit wire fraud.

Hogan is being represented by David Cole who said today his client will vigorously challenge the findings of the federal grand jury and auditor.

David Cole Jr., said he’s known Hogan for three decades and described him as a “hard-working, honest” lawyer. Cole said he’s confident the Hogans did not commit any crimes.

“If mistakes were made, I do not think those mistakes involved dishonesty, and I’m confident in the integrity of Michael Hogan,” Cole said in a phone interview with the AP.

Cole said he is not representing Joy Hogan and did not know who is. It wasn’t immediately clear who is representing her.

The newly unsealed federal indictment alleges that Mike Hogan and Joy Hogan conspired with each other to commit wire fraud by issuing checks from a second delinquent tax account for the Lawrence County Attorney’s Office, the statements for which went to their personal home residence.

The indictment alleges that Michael Hogan and Joy Hogan would routinely prepare “bonus” checks issued to Joy Hogan, and signed by Michael Hogan, paid with delinquent tax funds that should have been used on operating expenses for the Lawrence County Attorney’s Office.

Both Mike Hogan and Joy Hogan allegedly deposited these checks in Joy Hogan’s personal account and the couple’s joint accounts and spent the funds on personal expenses.

The federal indictment further alleges that between March 8, 2013 and April 30, 2020, Michael Hogan paid Joy Hogan more than $365,000, from the Lawrence County Delinquent Tax Account.  It alleges the Hogans used the money to make home mortgage payments, credit card and auto loan payments as well as on household expenses and utilities, according to a newly unsealed indictment issued by a federal grand jury in Lexington, Kentucky. They also made cash withdrawals, the indictment said.

The federal indictment also alleges Michael Hogan billed both the Lawrence County Child Support Enforcement Office and Kentucky Cabinet for Health and Family Services for far more hours than he actually worked. It is also alleged Michael Hogan paid his employees working for his private law firm in Louisa with funds from the Child Support Enforcement office.

On the one conspiracy to commit wire fraud charge, both Mike Hogan and Joy Hogan each face up to 20 years in federal prison, and a fine of no more than $250,000 or twice the amount of gain or loss.

Michael Hogan was arrested by the FBI Special Agent in Charge from the Louisville Office, Chelsea Holliday, late Tuesday afternoon, whereupon he was transported to and is being held in the Woodford County Detention Center in Versailles, Ky.

Joy Hogan was not arrested, but she has been issued a summons to appear in U.S. federal district court on Friday, June 11, at 1:00 P.M.

All this entire federal investigation and eventual indictments of Mike and Joy Hogan that it came about began in early 2020, when an investigation that was started by the Office of Kentucky State Auditor Mike Harmon; that led to a report that was released by Harmon’s office in May 2020, that initially accused Mike Hogan of giving his wife Joy Hogan of more than $100,000 in performance bonuses.

The audit states that in a two year fiscal period, Michael Hogan awarded $134,500 in bonuses from delinquent tax fees to people working in his private law firm office in Louisa.

Under state law, awarding bonuses for work not performed is against Kentucky’s Constitution.

Mike Hogan’s actions that were detailed in the state audit report also violated local ethics laws, because more than 90 percent of the amount went to his wife Joy Hogan, which personally benefited him.

The state auditor’s office referred the case to several organizations including the FBI, and the office of the Attorney General of Kentucky, Daniel Cameron, for further investigation.

Shortly after the public release of the mid-May 2020 state audit, Mike Hogan released a lengthy statement to regional area media outlets about the audit report, by stating at the time:

“Last week we received the findings of a random audit of the office of the Lawrence County Attorney conducted by the Auditor of Public Accounts for the fiscal year 2017-2018 and 2018-2019. We responded fully to every finding that was relevant to our office and we stand fully behind those responses. In regards specifically to finding one involving our office we have complied with the law as is written and followed all current guidelines as to how Kentucky County Attorney’s can lawfully disperse monies collected from the delinquent tax fund. We have broken no laws and made no expenditures that were grossly, unfairly or illegally dispersed. In fact the salary supplement made to our office manager were specifically allowed by previous guidelines from the office of the Kentucky Attorney General and adopted by the Kentucky County Attorney Associates. We have agreed to comply with all future guidelines to auditor and public accounts. And we hope the future acts of the General Assembly can provide more fine guidelines for Kentucky County Attorneys.”

After the federal indictments public release and subsequent arrest of Mike Hogan, State Auditor Mike Harmon’s office released a brief public statement about the case, It read as the following:

“Our special examination of county attorney offices has now resulted in two federal indictments regarding improper use of public tax dollars, I’m proud our office always follows the data, and I want to recognize my team for their hard work in holding public officials accountable to the taxpayers we all serve.” State Auditor Mike Harmon said in the press release.

Rep. Robert Goforth has had his own legal troubles recently as well, when in April 2020, Rep. Goforth was arrested on charges relating to domestic violence. The Laurel County Sheriff Department charged Goforth with first-degree strangulation, fourth-degree domestic assault and third-degree terroristic threatening for physically assaulting his wife, attempting to hog-tie her and strangling her with an Ethernet cord.

Rep. Goforth was taken to the Laurel County Detention Center. in London, Ky. In September 2020, Goforth was indicted on one count of first-degree strangulation and one count of assault in the fourth degree.

Rep. Goforth sought re-election despite his indictment, and was condemned by a number of pro-family groups, including Kentucky for Strong Families. Goforth was easily re-elected in 2020 with 70% of the vote.