GROWING UP IN LOUISA: Stormy Weather

I’ve seen downpours before and have lived through hurricanes and flash floods, but for a moment last evening, as I was driving home from work, I became truly worried. The black clouds just ahead of me were demonstrating nature’s power by dumping huge amounts of water that created a literal wall. It was like driving through a waterfall that was miles thick. Traffic slowed and then slowed some more with some pulling off to wait it out. My visibility went from barely making out the road, to slowing to a crawl and centering my car over the center lane marking in hope of not going off the road entirely. The storm was no longer sending sheets of rain because it was more like a solid wave that seemed to have no end. I became fearful that I may not make it home. The road surface wasn’t merely covered by puddles, but it was soon enough becoming lakes and rivers. I could see no one else on this highway and wasn’t sure except for the center road marking that there was a road. My mind made me wonder if the little bridge just ahead was washed out. Perhaps foolishly, I inched ahead not even knowing if my home would still be there. 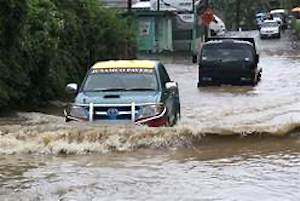 As suddenly as it began, I came out of the downpour and life was good again. I was grateful I had survived. The rain had stopped even if the ditches were running full or overflowing. I dodged downed limbs on the road and washed up piles of debris. I avoided lakes that weren’t there a short time ago. This storm had done its worst and moved on to other places in a matter of maybe twenty minutes. Now, the sun was out and everything looked clean and bright. I saw my home just ahead and all was well.

As I was telling Suzie of my ordeal I remembered how in the mountains storms were many times more dangerous because of the flash floods they created. I remember seeing the swollen creeks and rivers that happened from time to time in hills when I was growing up. She told me that once while living in West Virginia she was out for a walk when she heard a roar of water rushing from up the road toward her. She ran to her house and watched as a river of water several feet deep ran down the cut toward the other houses downhill. Suzie’s basement was full of muddy water as was everything down there including her laundry. Clothes washed just that morning were afloat, and power was out. It took days to wash the mud out and clean the basement.

I was in my early twenties when I was sent by the company I worked for to help clean up the basement of one of the businesses in the small town of Farmville, Virginia, next to the James River. It had been a department store, but only the upper floors were unaffected by a flood of that famous river. We laid out wet merchandise on the parking lot, perhaps in hopes it would dry. We worked all day washing, scrubbing and throwing away piles of ruined clothing. Some items were washed and donated but most lost their usefulness and were thrown away.

In the hills where I grew up it didn’t even necessarily have to rain before we saw high water. We were downhill, so the runoff of these storms collected and filled the Big Sandy and sent water and debris north toward the great Ohio. I can’t forget walking downtown to what was then Riverview Hospital and seeing houses and outbuildings floating downstream toward the broken locks. The water looked to be touching the bottom of the bridge and debris was crashing against it. Officials blocked the road because they couldn’t be sure of the integrity of the whole structure. It turned out that the bridge wasn’t hurt. It was years later when the old steel grid was replaced with modern concrete. 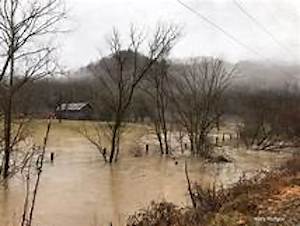 My thoughts go back to those in the county who lost their homes and in some cases, family members to high waters. I remember a few swinging bridges erected over what was usually a calm little creek filled with crawdads, to a torrent of rapid white water that was washing out the banks and destroying everything in its path. It wasn’t hard to visualize Noah’s flood of old, except back then it wasn’t just in the streams, but even the flatlands! I remember, too, God’s promise that the earth would not be judged again with water. That rainbow of the promise yet appears. These storms are often a sign of a warm or cold fronts moving through. I’m ready for some warm, aren’t you?

I am so ready for summer as described by George Gershwin in his song written for the American play, Porgy & Bess. “Summertime, and the living is easy…”  Last night’s trip home wasn’t quite so easy, was it?  The thing I like about summer is that slow, lazy time to take a sip on a cool drink, take my place on the porch, and dream of other times. Some of you show up in those memories, you know.

After years of weathering the storms of life I’d like to think I’m a little wiser. I know I’m a bit worn down, but it is life experiences that make it interesting and worthwhile. Certainly there are things to regret, and if we’re lucky there are things in which we can take pride, but in the end what we have left, are the memories.

So, in spite of torrential rainfall, enjoy these upcoming easy-living days. Relax and remember those times when we cooled off on life’s porches and listened to the rain. Why, I could even smell the rain as the dust settled. Relax, but watch out for those cloudbursts.