Parsley, Rose switch to GOP after running on Democrat ticket 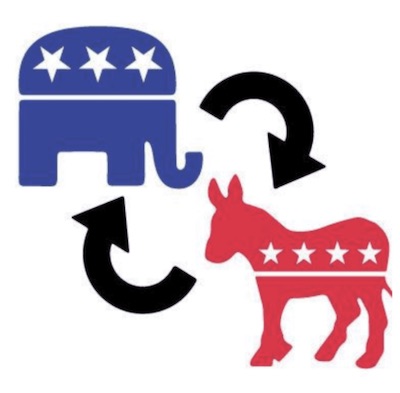 One old deacon put it this way, “I guess they saw the hand writing on the wall” to describe the political party switch of Lawrence County’s remaining two Democrat officials to the fast charging GOP.

He said the local party had nothing to do with the defections by Rose and Parsley.

“I knew they had switched but since the democratic party has been becoming more and more Liberal especially recently with such things as board control, abortion on demand, shutting down pipeline projects and the continued war on coal we have seen many people switching as Lawrence County is now solidly Republican, Dunn said.  “I wish our party could take credit for the switches but it is almost entirely on the democratic leadership pulling their party towards socialism.”

Both candidates seemed to follow that theme in their statements yesterday and both acknowledged the political part of their decisions as well. The decision had to include consideration of the “Trump” majority in Lawrence County and were possibly afraid of getting swept aside in a general election with a political GOP wave like the last two. The wave actually began with the election of America’s first black president Barrack Obama 12 years ago who was considered to be anti-coal, in a region solidly in the pro-coal camp.

The defections are part of a major trend in Lawrence County that has seen registration boom for the Republican who are now the majority by nearly 1,000 voters when 18 years ago was solidly Democrat in registration and in most county offices.

“I want the citizens of Lawrence County to know that I am still the same person with the same beliefs that I had when they elected me as their Circuit Clerk in 2006. But the political stage has changed considerably since I first took office, and I felt the need to also make a change, Parsley said. “I will continue to serve the people of Lawrence County with the same integrity, kindness and respect as I have strived for in the past 26 years of my career in the Clerk’s office. I would certainly appreciate the continued support from the citizens of Lawrence County.”

Property Valuation Administrator PVA) Chris Rose also cited his beliefs as the reason for the sudden change of parties.

“The decision to change political parties was a long thoughtful process,” Rose said. “Just as we grow and change through the years, so does the political scene. At this time I just felt it was necessary for me to change political parties. This does not change who I am or how I feel about everyone in our community. I am truly appreciative of the support of everyone in our community and hope they will continue to support the person they have always known, who respects them and loves serving them.”