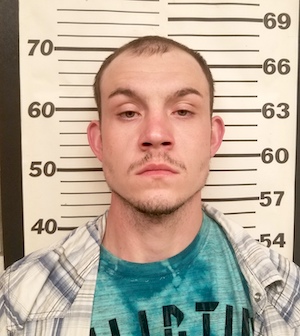 Sheriff Rick Thompson stated that a suspect was arrested this evening after a vehicle pursuit.

The Wayne County Sheriff Drug Enforcement Unit attempted to catch up to a 2018 Cadillac ATS when the driver accelerated and turned down Cedar Heights Road in Fort Gay. The vehicle continued at a high rate of speed to US RT 52 and then went South.

The suspect began passing vehicles on the shoulder and in the North bound lane. The roads were wet and the suspect continued to accelerate.

Due to the traffic on the roadway and road conditions the pursuit was terminated. The Wayne County Sheriff Drug Enforcement Unit received a tip and located the suspect and the vehicle shortly after on Lost Creek Road (Fort Gay). The vehicle was reported stolen from Canton, Ohio on May 27th.

Sheriff Thompson stated that Roger Waller, of Kermit,  is charged with Felony Fleeing in a vehicle and Possession of a Stolen Vehicle.