Prestonsburg, Ky. — Taylor Blevins backed up her no hitter on Monday with a four inning perfect game as Lawrence Co. ( 27-8 ) won their sixth consecutive district title 16-0 over Floyd Central ( 12-16 ) Tuesday at the Prestonsburg Sports Park. 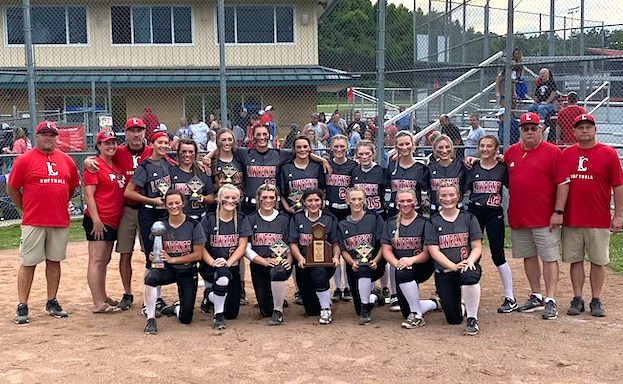 Blevins struck out 10 of the 12 batters she faced and the other two grounded out to first baseman Shelby Blevins. She also contributed one RBI at the plate. 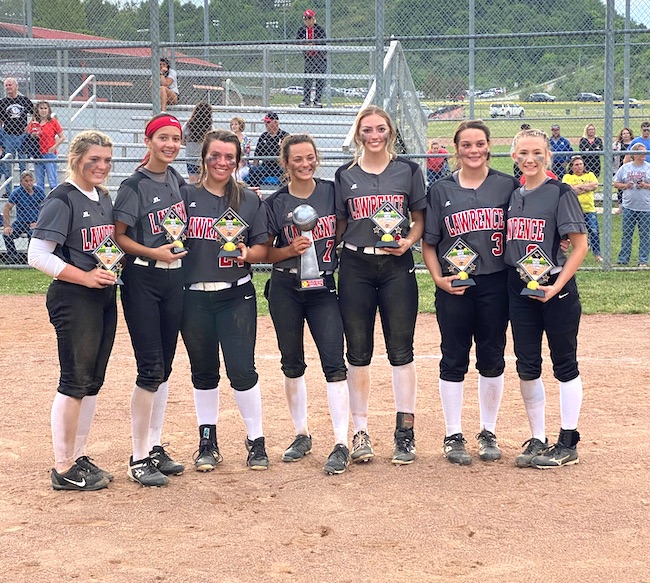 Both teams will advance to the 15th Region Tournament that will be played at East Ridge.

The Bulldogs will play either Paintsville, Shelby Valley or the loser of Belfry/Pike Co. Central in the first round.

The Jaguars will play Johnson Central, Pikeville or the winner of Belfry/Pike Co. Central in the first round.

“… So happy for Taylor Blevins, she has been up and down a little and I have been on her a lot but she really bowed up the last two days. For a seventh grader to throw a perfect game in a District championship game, she may not think it’s special now but later in her life it will be.”

“… She didn’t throw very many balls tonight, I think she only went to three balls on one hitter and that should have never got that far because Dani set up perfect for strike three. I’m happy for her and I’m happy for the girls and excited for our team to win the title tonight but this isn’t what we are after.”

“… Shelby Blevins clutches up every time she has the opportunity. She is protecting Crum and Feltner sitting in the five hole and you can’t pitch around them because she will make you pay. Gracie Preece has only been back a few games and it was so good to see her end the game with the walk off double. Our offense has been good all year, you can look at our stats and I got three kids hitting almost .500 not very many teams can say that. I think when the regular season ended we were leading the state in runs per game. That’s pretty good coming from a bunch of babies and that’s what we’ve got.”

“… Excited for another Region Tournament, we started this year with not super high expectations because of our youth but about halfway through the year we had to recalibrate because they have advanced so quickly just understanding the game, adjusting to pitching and doing everything that you ask them to do and because of that we have been able to get more in depth on how we are coaching them. This has been a fun team to be around and we are excited for the next step, anytime you can get to a regional tournament with a young bunch and let them go through the process and get that experience it’s a good thing and you can’t put a price on that. You know what our goal is and I think we have a shot. We just have to be who we are.”

“… I just tried to focus on hitting my spots and if they put it in play I knew my defense would make the plays. Dani Crum did a good job setting up early and giving me a good target, she does a great job back there. My teammates did a great job by scoring runs early on and giving us a cushion. Really excited to play in the Region Tournament this coming weekend.”