NEW KENTUCKY STATE POLICE K-9 TRAINED TO SMELL AND SNIFF OUT ELECTRONIC DEVICES THAT COULD CONTAIN CHILD SEX PORNOGRAPHY, AND OTHER DISTURBING IMAGES 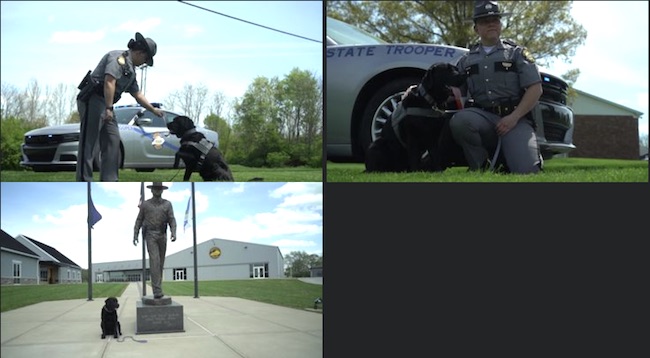 The Kentucky State Police (KSP) has been putting the spotlight on its newest member during the month of May, a two-year old black Labrador K-9 unit named ‘May’, appropriately enough’.

But while most people have heard of police dogs being trained to locate drugs or missing people, K-9 May’s job is a little more unique.

Serving as the agency’s first electronic storage device (ESD) detection canine, she is one of only 51 ESD canine units in the country. May was trained by Jordan Detection K9 located in Indianapolis, Indiana. They partner with the non-profit organization Operation Underground Railroad who assist law enforcement in rescue efforts of children that are victims of human trafficking. Part of that project includes providing funds to train ESD K9’s like May and thanks to this partnership, KSP was able to receive May at no cost to the agency.

K-9 May received training in scent discrimination, pinpoint accuracy, open area searches and realistic scenario based training. Additionally, each canine and handler team work together to support other missions such as workplace therapy and victim disclosures.

K-9 May serves this dual purpose as she’s also a comfort dog, when needed on difficult scenes. The KSP has already utilized her in that role for a recent child exploitation investigation. While detectives were interviewing the child victim, they were able to bridge the gap by bringing May to meet and interact with the child.

K-9 May works out of Kentucky State Police Electronic Crime Branch in Frankfort, and travels the state to assist in investigations.

Lieutenant Mike Bowling is the Commander of the KSP Electronic Crime Branch and says K-9 May has already proven herself to be an asset to their team.

“May has assisted our branch detectives with four search warrants and has been successful during all her deployments thus far,” said Bowling. “She has located key pieces of evidence during these investigations and we are pleased with what she has already brought to our team.”

ESD Canines gained national attention in 2015 during the investigation of Subway pitchman, Jared Fogle. An ESD Canine named “Bear” located key electronic evidence in Fogle’s home, leading to his conviction and was sentenced to 15 years in prison for sex crimes.

K-9 May’s handler is Detective Leslie Strong, a seven-year veteran of the agency who is assigned to the Electronic Crime Branch. “She’s a smart dog and has been great to work with,” says Detective Strong. “In her free time, K-9 May enjoys belly rubs, squeaky toys and naps.”

KSP SHINES A SPOTLIGHT ON THEIR UNIQUE CANINE OFFICER

The KSP has been participating in a social media campaign this month called ‘The Month of May’ to highlight the work May accomplishes on a daily basis while also sharing some fun ‘off-duty’ photographs to allow people the chance to get to know her better.

K-9 May is a lovable two-and-a-half year old Labrador ready to help solve crimes. She’s friendly, but serious, and her specialty is sniffing out hidden electronic devices for Kentucky State Police that may contain hundreds or thousands of images of child pornography.

A dog’s sense of smell is powerful– sometimes 100,000 times better than ours. They’ve been known to sniff out people, drugs, disease and now electronic devices that could contain images of child abuse.

“The odor that May detects, it’s a specific chemical used in the manufacturing process of electronic devices that have storage capabilities,” said detective Leslie Strong.

To put her to the test, May’s handler Detective Strong hid four electronic devices that might store disturbing images in a conference room. Thirty minutes later the devices emitted a specific odor that only a trained dog can smell, and off she went.

In less than five minutes, she found all of the hidden evidence and got a treat.

May is one of 51 K-9s in the country and the only one in the state qualified to do this. So far she’s been on four search warrants.

“In each search warrant she’s found some hidden devices that had child sexual abuse material on it and has allowed us to charge the perpetrators in a situation,” Detective Strong said.

The two have been a team for more than a month, since the beginning of April, and after every successful search, Detective Strong said she is amazed by May.

“Even though I know what she’s capable of, I’ve been through training with her, I’m still in that ‘wow this is so cool to see you in action’ you know,” Detective Strong said.

Anyone who wants to keep up with K-9 May, they can go to follow her on Instagram at https://www.instagram.com/ksp_k9may/