Allie Triplett was on point against Greenup Co. 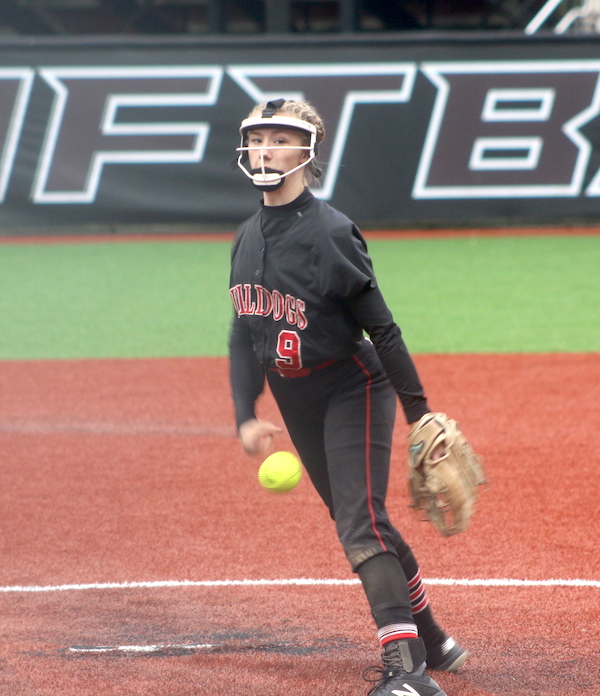 Allie Triplett threw the five inning shutout to get the victory in the circle.

Taylor Blevins threw a six inning mercy shortened three hitter over the Cougars on the road in the first game of a doubleheader.

Dani Crum, Kensley Feltner and Abby Nelson all homered in a doubleheader sweep of Letcher Co. Central on Monday.

Kensley Feltner hit her 11th home run and Abby Nelson hit her 3rd of the year as the Bulldogs swept the road doubleheader.

Allie Triplett went all seven innings to get the win in the circle and she also singled and drove in two runs to help her cause.

The Bulldogs scored in every inning but one and pounded out 14 hits to get the road victory in Morehead.

Dani Crum hit her 11th home run of the year but it wasn’t enough as the Bulldogs fell on the road to the Wolves.

Lawrence Co. will finish out regular season play on Friday at home against Letcher Co. Central and then will open the 58th District tournament as the #1 seed on Monday versus #4 Betsy Layne at Stonecrest in Prestonburg at 1:00.

“… The win against Greenup Co. was a quality win. Allie Triplett was dealing it tonight. Greenup is a very good hitting team and Allie was able to keep them off balance with some off speed stuff. I’ll have to say, Allie is a gamer. Don’t matter where I put her she preforms and never complains. So many players could learn a big lesson from her on what a team player really is. Shelby Blevins was clutch every time she came to the dish. It important to us for her to protect the big hitters in front of her and she has done that all year. I also admire her toughness, she has played all year injured and has never once complained.”

“… Letcher Central was long drive but it was well worth it! Girls came out on fire with that look we need to be successful. Taylor Blevins dealt a gem. First time they have been shut out all season. The back breaker was a grand slam
by Dani Crum in the first game. The second game was much the same as we kept swinging it. Played much better defense and seemed to be focused.”

“… Good win for us over Rowan Co. I’ve always Respected Larry Slone. He’s a great coach and has been a good friend through the years. We struggled on defense again but our bats covered for us. When you look at us ,the thing that gives me pause is how up and down we are on defense. Hopefully we can get it fixed in the next few weeks.”

“…We looked pretty rough on defense against Wolfe Co. We couldn’t catch it with a dip net! Very disappointed in our mental focus. Only bright spot was Dani Crum hit a bomb on a old baseball field. We will get back at it and keep grinding. We are young and you can expect that from time to time.”

Lawrence County Court Docket for the week of May 17-21