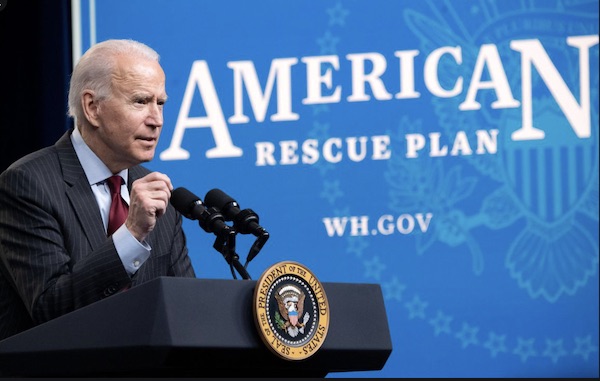 FRANKFORT, Ky. (May 10, 2021) – Today, Gov. Andy Beshear announced the commonwealth is receiving $2.183 billion from the American Rescue Plan Act of 2021 for the Coronavirus State Fiscal Recovery Fund, with the allotment smaller than a previous estimate because of the state’s positive economic performance.

“Our economy is surging and strong,” Gov. Beshear said. “We are in a strong position to sprint out of this pandemic with continued positive economic indicators and with this funding that will create jobs, momentum and a better quality of life in every corner of the commonwealth.”

The U.S. Department of the Treasury announced state allocations today based primarily on each state’s share of the nation’s number of unemployed individuals from October through December 2020. The commonwealth performed better than expected in the fourth quarter of 2020, when the preliminary data was used. Based on the improvement in Kentucky’s employment numbers, the initial estimate of $2.441 billion was lowered to $2.183 billion.

Gene Sperling, who is coordinating the implementation of the American Rescue Plan for the White House, talked Monday to Gov. Beshear and State Budget Director John Hicks about the change ahead of the Treasury Department announcement. The change is the latest sign of a healthy and strengthening Kentucky economy that is outperforming many other states.

“The commonwealth will receive $2.183 billion for the Coronavirus State Fiscal Recovery Fund, with half available later this month to assist Kentucky with responding to the impacts of the pandemic,” Director Hicks said. “The preliminary estimated amounts available during the budget process did not yet recognize the level of reduction in the number of unemployed Kentuckians. Kentucky’s downward revision was the seventh largest among the states with better unemployment figures.”

Kentucky will soon submit a request for the funds to the U.S. Department of the Treasury.

The Governor said the final allocation does not impact the bipartisan agreement reached by lawmakers and his administration during the 2021 regular session, which will use nearly $1.3 billion to boost the state’s economy by expanding broadband, delivering clean drinking water and building new schools. The plan is expected to create more than 14,500 new jobs

Sales tax receipts in April were $486.5 million, an all-time monthly high. They were more than 40% higher than last April. Motor vehicle usage tax receipts hit over $64 million, producing an all-time record for this tax type in the road fund.

Sales tax collections, which reflect March sales, were supported by the $1,400 stimulus checks and February’s weather likely delaying some purchases. Sales tax receipts have risen 9.5% for the 10 months of fiscal year 2021.

Last week, the Governor announced that one of the big three credit rating agencies, Fitch Ratings, improved the state’s financial outlook to stable, reflecting the commonwealth’s solid economic recovery from the pandemic. The new rating highlighted how Kentucky’s employment recovery through March has been slightly ahead of the national pace.

Even with the pandemic, the Governor announced 270 economic development projects that will create more than 8,000 new jobs. The average pay for those jobs is one of the highest in years. He supported our rural communities with more than $124 million in investment, for 160 projects that are helping to diversify regional economies.

In March, Site Selection magazine’s annual Governor’s Cup rankings for 2020 positioned Kentucky atop the South Central region, and third nationally, for qualifying projects per capita. The commonwealth also placed seventh overall in total projects, the highest of any state with a population under 5 million.

The Governor continues to urge every Kentuckian to be vaccinated so we can save more lives, end the pandemic and continue our economic momentum in the post-COVID world.

ARC welcomes a legend in the addiction treatment industry