GROWING UP IN LOUISA: Scary Movies

When I was growing up I had exposure to hours and hours of Hollywood’s creations of vampires, werewolves, monsters, and men from outer space. We were shown realistic movies (of the day) of the macabre, including ugly creatures of all kinds that would attack kids and adults while leaving utter destruction. Of course, none of these were real, but they seemed real to us watching those Saturday matinees. They certainly brought a level of excitement to our little Garden Theater. Sometimes those movies followed weeks of advertising of short scenes from the upcoming film that were scary enough to even make grown men cringe. Most of them lived up to their promise. Kids with weaker dispositions screamed, covered their eyes and slunk down in their chairs. Truthfully, what those early exposures did was to inoculate us from fear and allow us to tolerate even scarier productions, including today’s shocking flicks. A few times that I have watched the classic horror films I have found myself laughing rather than cringing. They were so amateur because while we were adjusting, so was Hollywood.

While horror films are certainly not new since mankind seems always ready to embrace dark ideas, they continue to be popular even from those days of the silent movies. There are plenty available today through various apps installed on our handhelds and the big new flat-screens in our homes. In addition to growing numbers of films, the special effects are certainly many more times realistic, pushing the edge of invention to ever more horrible heights. Blood, gore and violence are depicted in amazing detail causing me to cringe and hope to survive another day. I suppose with the technological advances things will only get more realistic.

I’ve seen the old black and white replays of Count Dracula rising from his coffin to take his fill of human blood, first turning into a bat and then a man of aristocratic birth moving between the furniture to avoid mirrors and certain discovery. In those days a sweet damsel was always the target we prayed would be spared this fate worse than death, perhaps by a handsome hero with the necessary tools to do in the monster. I was once a lighting technician on a stage play of Dracula. There were a few special effects and special lighting that permitted the audience to see more than the innocent actors. During the play a picture hanging over the mantel faded from a family portrait to the face of the fanged spook listening in on the planning that was 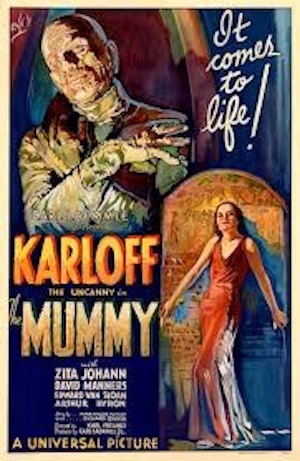 purported to drive him away. The audience squirmed knowing the Count was listening in. The young damsel was doomed to feed the evil man and join the hordes of the undead. Curses!

Like today, during the fifties there was a rush in Hollywood to turn out all kinds of such films, many with Zombies rising from their coffins to spoil the lives of the youth. We saw monsters of all variety, including slimy creatures rising from the Black Lagoon, and apes that climbed the Empire State building, or even just globs, or Blobs of biomass that encroached the neighborhood much as this week’s flowing lava so much in the news. Lacking a better name there was ‘Thing,’ that was a member of TV’s Adam’s Family.

When growing up we saw movies of good men that turned into flies, or were under the curse of the prehistoric high priests that sealed the pyramid. Monsters came from outer space or from the depths of earth to eat Tokyo or Gotham. The US Army and the Air Force were useless against those powers, but somehow, by the act of one brave person, the world was finally saved.

Overlapping all of this were the classic movies of Frankenstein and The Bride of Frankenstein, but none of this was new. The novels of the day preceding this feast of horror, included spooks, haunts, and even a black bird called the Raven. The Victorian practice of mourning with what today is considered macabre went far beyond a clipping of hair from a loved one left lying on a board, waiting for the burial to follow. Some mixed clay to make a death mask whose purpose is lost on me.

A favorite on TV and at the movies was anything produced by Alfred Hitchcock. Yes, whether flocks of birds, a low-flying airplane, a fall from a church belfry, and worst of all, a shower scene showing almost too much of the death of a pretty girl. The quick, flashy screen shots and spine-chilling, squelching music, made us sink down in our chairs and wish for better times. Oh the humanity! TV had its Twilight Zone and other similar programs, but as if to change gears they began to spoof the very thought of this dark thinking. Out came the Munsters and the Adams Family and a hit song from our day called “The Monster Mash.” 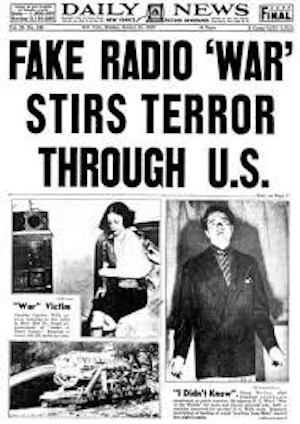 It was television that told me the story of Lizzie Borden and other creepy and unexplained phenomenon. Then I remembered hearing about the invasion from outer space with Orson Wells’ War of the Worlds in 1938. The country was scared nearly to death, but it seems they loved it. Adrenalin flowed and hearts quickened, and our minds raced as we wondered our fate.

Some of this was a lot for me, a kid who cried when Bambi’s mother was shot. It was a fast track to maturity, a sudden growing up, and an awaking to the darker side of life. These are the things nightmares were made of, and seemed to be pure evil. I can tell you that I awakened more than once in the middle of the night as a result of this exposure. Still, I almost craved to see movies of the frightening kind. It must have sold tickets because Hollywood is still churning them out and kids are lining up to watch them. What is it about us that enjoys such amusements?

I remember once when I turned out of my office hallway and passed the desk of an employee. She suddenly stood up and said, “I knew you were here. I felt a disturbance in the force.” Caught off-guard, and respecting her acumen, I felt disarmed as I holstered my light-saber and let her live. You see, Darth Michael is not totally given over to the dark side.

If you enjoyed these memories, my purpose of bringing back these scary times is served.  I think that sometimes we have to see the darkness to truly appreciate the light. What a relief when we left the theater with our emotions drained but now awash with the sunshine and realization that it was just a movie.

Sometime, when you are ready, you might for old time’s sake, take a few minutes to watch an old horror movie. The last scary scene I watched caused me shake my head and smile. I wondered whatever in that film scared me back in the day. I changed channels to find something better. It was freeing to know the Count wasn’t so scary anymore.