One student flown to Med Center but escaped serious injury 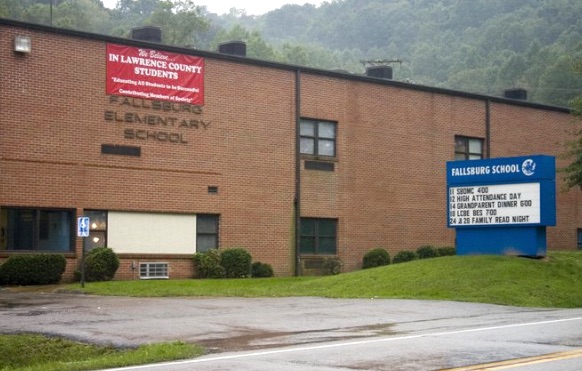 What started out as a group of elementary students finishing up an enjoying outdoor math class late Tuesday afternoon ended instead in a horrifying situation that bordered on the edge out of something out of the ‘Final Destination’ movies.

It was a near tragic warm sunny day for students, teachers, staff, and especially at Fallsburg Elementary that no one could have imagined the bad luck for the group of kids for what they were about to encounter.

According to a statement released by Lawrence County Schools on their FaceBook account; two Fallsburg Elementary math classes of students were held outside at the Fallsburg Elementary School in Fallsburg, Ky., located around seven miles northwest of Louisa, when they said around 3:00 P.M., the students were returning from their outdoor math session when a wheel broke off a trailer that was being hauled north on state Route 3, which runs by the school.

The wheel crossed both lanes of the road, then a ditch, and then the ridge by the school sidewalk. That is when the flying tire hit the school building and ended up ricocheting onto three students.

All three suffered injuries, with one of the students, a 10 year-old male fourth-grader, was struck in the head by the rogue tire, suffering injuries considered serious enough that the 10 year-old fourth-grader was flown by an air medical helicopter to a hospital in Huntington, West Virginia.

Emergency first responders report that the boy was responsive and talking as he was being transported.

In somewhat of a miracle, the medical prognosis ended up better in a very luckier outcome for the 10 year-old boy, as well as his family.

The mother of the boy who was flown to a hospital after the freak accident Tuesday evening, said in an interview in an interview with Huntington West Virginia television news station WSAZ, that fortunately the injuries weren’t as severe as they’d feared.

The woman reported that her 10-year-old son, both of whom names were not identified; suffered a concussion, and that he had a whole lot of bruising and abrasions, but he was able to go home from the hospital Tuesday night.

The injured boy’s mother stated that she and her family will have to keep a close eye on him and follow up with the concussion center.

A Fallsburg sixth-grader Gracie Stone, who was interviewed by the WSAZ reporter, stated that she was in her class inside when she said the school secretary announced on the intercom the school nurse was needed outside for an emergency.

“That was really awful timing, because they were coming right in from class,” Gracie Stone said. “I bet they were just sitting there joking around having a good time, then all of a sudden, bam, that just happened.”

The name of the driver who was hauling the trailer that the wheel broke off of and flew onto the three kids, has not been identified, as well as what, and if, any motor vehicle infractions and legal ramifications that the driver could be facing.