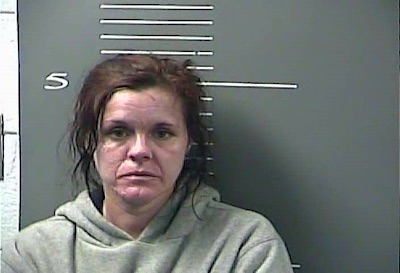 SHE CALLED 911 LOOKING FOR AN UBER OR LYFT; SHE GOT RIDE VIA KSP INSTEAD: AMANDA R. MILLS, 37, OF LOVELY, KY., ARRESTED FOR MAKING A FALSE INCIDENT STATEMENT

A Martin County woman who made a phone call to a local emergency agency and that she reported to them that she had been poisoned by gas, told a responding officer that all she really only wanted was a ride to her mother’s house.

But unfortunately for the woman, she got a ride to jail instead.

According to a press release statement from the Kentucky State Police Post 9, in Pikeville, Ky., around 10:30 P.M. Sunday, April 25, KSP trooper Tracy Salyer responded to the home of Amanda R. Mills, 37, of Lovely, after Mills called 911 to report that she had been “gas poisoned.”

But when trooper Salyer arrived at Amanda Mills residence, she stated to trooper Hale that she was fine, didn’t need medical attention, but did need a ride to her mother’s house.

When trooper Salyer asked if that was the only reason that she called 911, Amanda Mills reportedly said yes.

Amanda R. Mills was arrested and charged with falsely reporting an incident. Mills was transported to and lodged in the Big Sandy Regional Detention Center in Paintsville,where she remains there as of late Tuesday morning.

Amanda Mills has a pretty extensive criminal arrest history in the local area; as this latest brush with law enforcement with Ms. Mills marks at least the 28th time she had been arrested since January 2009; with most of them taking place in Martin County; on over 40 various charges and infractions, usually related to alcohol or drug induced public intoxication, and also DUI charges.