The Lady Rebels getting instruction during a timeout against Calhoun Co. Photo Credit Barb Litton 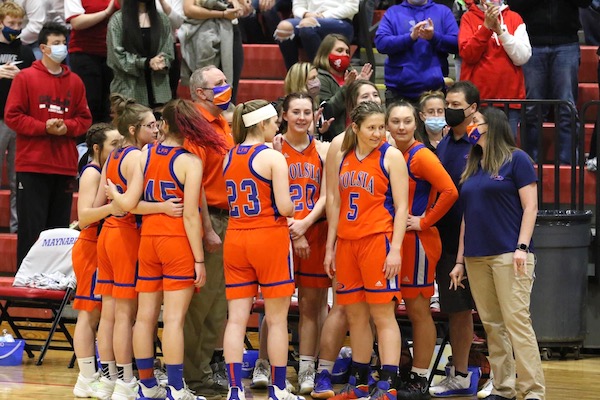 Tolsia was led by Selena Browning with 12 points and 13 rebounds, Kylea Pollinger and Kerigan Salmons posted 10 points each, Autumn Block netted 8 points and dished out 4 assists, Julie Boone chipped in with 5 points and 11 rebounds, Isabella Simpkins hit one free throw.

The Rebels hit four three pointers and went 4 of 9 from the foul line.

#22 Kylea Pollinger heads toward the basket after picking up a steak at mid court. Photo by Barb Litton 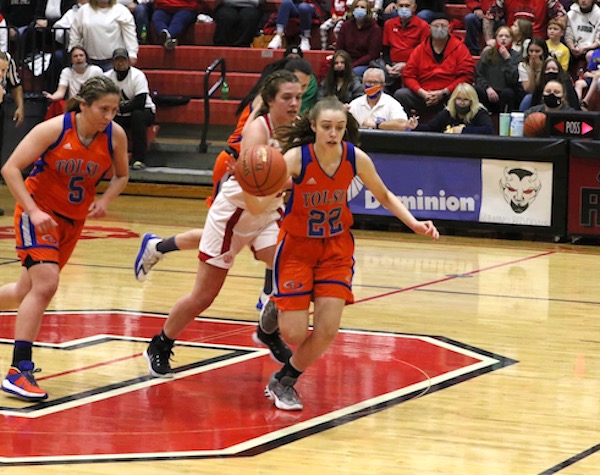 The Red Devils hit four three pointers and went 11 of 19 from the foul line.

This Lady Rebel Senior class that includes Julie Boone, Kylea Pollinger, Selena Browning, Kenzie Young, Isabella Simpkins and Jace Litton were outstanding all four years and faced challenges that most groups shouldn’t have to and came out ahead.

Calhoun Co. will be the number three seed in the upcoming WVSSAC Girls state tournament held in Charleston and will begin play Tuesday morning at 9:30 against #6 River View who is 15-2 on the season with one of their losses to Tolsia at Rebel Arena.

“… Give Calhoun County credit, they made the plays down the stretch. We had too many mistakes to overcome in a regional game, however our girls battled til the very end. I was proud of our girls for making the Region 4 Finals for the first time in 3 years and being one step from the state tournament.”

“… This season has been one like no other, between the starts and re-starts , the uncertainty to the cancellations and schedule changes on the fly and our girls never wavered, they did everything we asked and in the end were able to get a season in. I wish we had gotten a full off-season and full schedule in with this group, they were really coming together late in the season and finding their identity as a team. We have 6 wonderful seniors that are great players and even better people. This has been one of the most enjoyable seasons for me and my coaches , it was fun to see them work together and grow together as a team. This group is special in that they all stuck with it and accomplished a lot and had fun doing it. They will all be successful in their future endeavors! The returning players have a lot to rely on from what they got to see this senior group do day in and day out . Lady Rebel Basketball is better for this group coming through. We are excited to see what the future holds for our program moving forward for sure, but our seniors will definitely be missed!”