GROWING UP IN LOUISA: The Benefits of Fasting

The Benefits of Fasting

This morning I am fasting because I have to have some bloodwork done later in the day. Of course, even a slight delay of having breakfast causes me to want to eat. My stomach growls and I am nervous as if something is wrong, casting worries about the danger of wasting away. Silly me! In truth, I am not in the slightest undernourished and will hardly starve even if the fast should continue for days. My mental state may be questioned because it feels as if I have separated myself from regular people who eat and enjoy the breaking of bread together. To deal with this, it’s really about having the willpower and to focus on things other than food. The old adage about not missing things until they are out of reach applies. When fasting, frankly I miss food. That truth has made me wonder about the meals I had when I was growing up. My affection for food had to start somewhere. I have a vague memory of mom testing my warmed milk on her wrist to ensure it wasn’t too hot for her little muffin (me).

As I grew older up in the forties and fifties, I can compare the meals we had back then with what I gulp down these days. The meals were rather simple. I suspect that in our grandchildren’s minds, the food from those days took a lot of effort to prepare, and in the end were still rather plain or bland. We were there so we know the truth. Homemade foods were always the ‘best’ one could have. Why, restaurants advertised their dishes as ‘homemade,’ which meant their food was up to the benchmark standard of mom’s cooking.

Yes, yes. Mom’s cooking was not bland at all, but was swimming with subtle flavors that satisfies and had us reaching out for more. I remember the joyful sound of pots and pans clashing and mixers running to create another successful meal. I can remember the wonderful pancakes, waffles, fried ham or bacon, or some hot biscuits and gravy that would soon be put on a plate in front of this salivating kid. Why, in those days a really good meal meant a lot of effort (by today’s standards) and knowhow. It also meant more cleaning up afterward, but it was worth it! 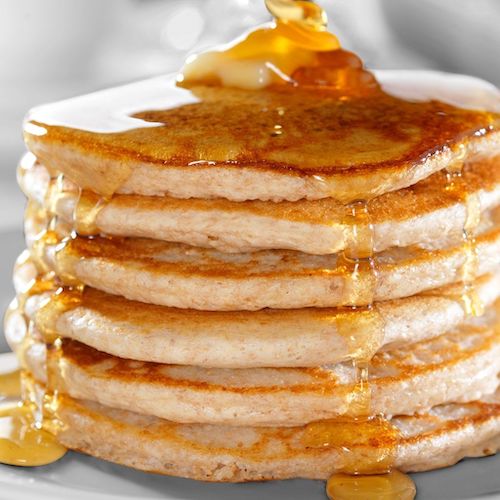 Back in the day the meals were made from simple, basic ingredients like flour, eggs, milk, salt and flavoring that came from bacon grease. Don’t get me wrong, mom just didn’t fix fancy things like eggs benedict, but what she did make was yummy. I remember eating at my Aunt Barbara’s table out on the dairy farm. Breakfast was a big, big meal. Piles of pancakes, dishes full of eggs, gravies, biscuits, and even hot oatmeal, blessed the center of the table while being dished out to hungry little mouths. In any case, it wasn’t anything like the ‘fast food’ that people today pick up on the way to school or work.

Making those dishes required dedication and commitment by the cooks of yesteryear. It also took a bushel of effort and knowhow to make them just right. Meals back then weren’t pre-processed at all. They didn’t include mixes or anything that had been assembled together in some far off food factory and brought in by truck. The housewives of our day started with a bag of flour, perhaps taken from a shifter in the Hoosier cabinet, and some sugar, fresh eggs delivered by the egg lady, a glass quart bottle of milk, and a brick of real butter just delivered from the farm. Whatever was fixed turned out to be magic and hit the spot. Compliments would follow a good meal and younger hands would join in the chore of washing dishes and putting left-overs away. Cleanup back then took a little while but was another time we bonded as we worked. Today, we too often just throw away the paper bag and dirty paper napkins.

These thoughts took me to the memories of meat counters in the little grocery stores. They had a selection of ‘cold cuts.’ The more expensive cuts of red meats were the T-bones steaks, porter house steaks, and sirloins steaks. Only a few would buy those and even then, very rarely. It was a noteworthy treat to look down and find them on the plate. They didn’t have the grills we have out on the deck or patio, so they were popped in a skillet. Most of us had cheaper cuts such as pork chops, ground beef and maybe a pounded steak to fry up with some sopping good gravy. Chicken was another choice. Those came from the grocery all dressed and ready to either bake or cut up to make a fried delight. In those days you could sometimes also buy a live chicken, if you were keen on wringing their necks, dipping the bird into boiling water and plucking its feathers. I watched granny do this many times when I was growing up.

Those living out in the country had their own livestock. They butchered their hogs and hung them in the smoke house to season. Sometimes, they had wild boar, or venison on the table. Eating could be very good and included squirrel, rabbit, fish, and maybe more. In any case, they didn’t have chicken nuggets in those days. 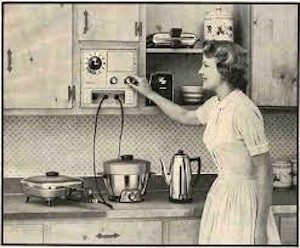 I remember times when we had liver and onions, a meal that kids felt was a punishment for some unnamed crime, but that we learned to like. Maybe some of us still enjoy a platter when we can get folks to agree to make it. We had bacon that was either for breakfast, or used to season greens and freshly strung green beans. Sometimes we had Canadian bacon, or a pot roast smothered with new potatoes, onion, carrots, and celery. I especially remember the beef stock that was poured over the freshly buttered potato. Those were perfect for sopping up with mom’s wonderful yeast rolls.

Whether it was country fried steak, fried chicken, a roast, or a baked hen, eating in those days was good. Fresh garden picked green beans that were strung by loving hands and seasoned with pieces of ham, or some collards or kale, also seasoned, absolutely made the meal. I remember mom’s potato salad, and slaw, and macaroni and cheese balanced the meal. We also sometimes had Welsh rarebit. That was melted cheddar cheese poured over some toast or crackers, maybe with some country ham on the side. To melt the cheese I remember mom using a double boiler to keep it from burning. We had hamburger in a thousand different ways, including a hamburger on a bun. I enjoyed buying these out, sometimes like the Big Boy with the secret sauce (thousand island) sold in Huntington.

We had spaghetti often enough, too. It was fairly inexpensive and easy to make. It was usually full of browned ground beef, chopped onion and Italian seasoning. Sometimes it had chopped bell pepper, and meat balls in the sauce. We tried to have Italian bread, but sometimes store-bought white bread was toasted and spread with garlic butter. I had also had tasted ravioli and one or two other pasta dishes. We had Spanish rice, which was rare, and sometimes had chili, but, these ‘foreign’ dishes were not the norm. Things were to change.

I was thirteen when I tasted my first Pizza. Life would never be the same, but it has gone much further in this melting-pot America than I would ever have thought. It is a model of how diversity has come to make us a hybrid nation, a mixture of old and new influences of many cultures. In many ways, the new has replaced the old. Many of the meals, or snacks, of today are only words to me. They are usually words of a different language. Okay, when I was younger I had heard of a Taco, but not Taco Bell. Now every menu has items of Spanish origin.

Stir-fry,’ which I assumed was some Chinese mixture of vegetables was easy and tended to use less meat and more vegetables. The dishes may be ‘sweet and sour,’ or like some deep-fried stuff, very spicy. All I remember from the old days was Chop Suey and those wonderful crunchy bread-noodles that came in a can.

We sometimes ate fish, or salmon, or even salmon croquettes, or a can of packed sardines. We had tins of Spam and Vienna sausages, and once or twice we had some oysters. These days I eat a lot more seafood but I live near the Atlantic Ocean. The difference is that I eat seafood out rather than at home. Mom wouldn’t have had much of an idea to cook anything much beyond the fish we’d catch now and again.

Now, imagine what it would be like to enjoy mom’s cooking again. It’s easy to remember when you’re fasting, but then today’s foods are pretty tasty and only requires a minute in the microwave. I suspect it is really more expensive because of the handling and layers of suppliers taking their cut. The trick is to find the balance. My wife keeps some free-range chickens and ducks for eggs. There’s no doubt they are better than the ‘store-bought’ variety, but it takes some effort to clean their hutches and to protect their roosts from local wildlife. Those eggs are great both in color and taste.  Whoops, my mind has wandered. I guess I forgot that I’m not eating this morning. . .      mcoburncppo@aol.com