SUSPECT FLED STORE, BUT WAS CAUGHT IMMEDIATELY AFTERWARDS BY EAGLE-EYE CUSTOMER WHO DETAINED HER UNTIL POLICE ARRIVED AT SCENE 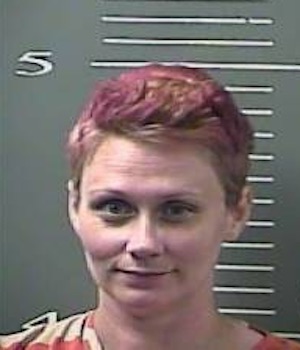 A Paintsville woman was arrested on Thursday night, April 15, 2021, and charged with *ROBBERY, 1ST DEGREE, after she held up a convenience store while claiming to have a weapon .

According to information from the Paintsville Police Department, the robbery happened around 9 P.M., at the Shell Mart just off Route 321 in Paintsville, next to the Days Inn.

The police report indicated that the female suspect, identified as 33 year-old LaVonna Collins of Paintsville, allegedly went into the business and claimed to have a weapon and demanded money. Once she got the money from the store clerk, Lavonna Collins exited the business store.

As Lavonna Collins exited the building, another customer who saw what had just happened, ran down after Lavonna Collins, and would manage to detain Collins near the business until law enforcement arrived on location.