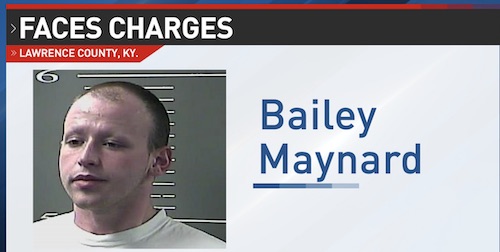 NOT FUNNY DUDE: BAILEY ALEXANDER MAYNARD; WHO GOT HIMSELF ARRESTED AFTER HE WAS NABBED BY POLICE AFTER REPORTS OF A MAN CARRYING WHAT WAS THOUGHT TO BE A GUN NEAR SCHOOL GROUNDS ON MONDAY, APRIL 19.

The Lawrence County High School and Louisa Middle School were placed on lockdown Monday afternoon after school leaders were advised that there was a man walking in a wooded area near the schools and he appeared to be armed.

Officers state that the suspect, who was identified as Bailey Alexander Maynard, 21, of Louisa, where officers determined Maynard had brought a BB gun on school grounds and was walking toward the wooded area in a manner that raised suspicion and alarm.

Bailey Maynard was transported to and lodged in the Big Sandy Regional Detention Center in Paintsville. Maynard was released from jail after posting his bond Monday evening.

This month of each year unfortunately has most people and emergency and police officials in our country on a state of a higher edged awareness, as the there are numerous violent anniversaries, as Tuesday is the anniversary of the Columbine school massacre, Monday the 19th was the Oklahoma City bombing anniversary, and April 16 was the Virginia Tech university massacre, which this year was almost simultaneously marked with FedEx massacre in Indianapolis on late Thursday night, April 15; the latest of the 54 shooting massacres in the U.S. in past the 30 days. 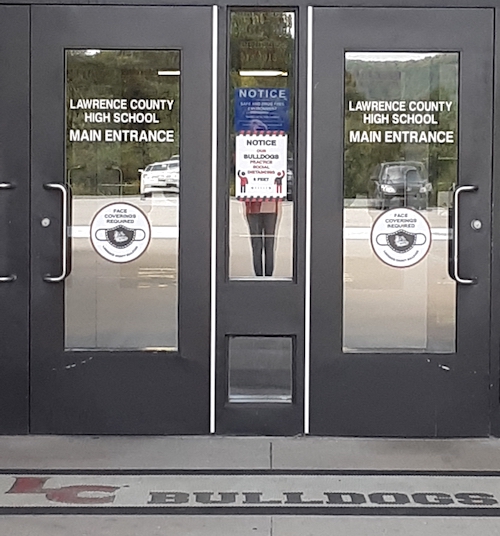 “…On Monday, April 19th, at approximately 2:25 PM, we had a young man (early 20’s) who was seen on campus with what appeared to be a firearm. He was walking towards the wooded area near the tennis courts. The Lawrence County Sheriff’s Department and the Louisa City Police Department were notified and responded immediately. The young man was apprehended by School Resource Officer Julius Musick. It was determined that he was carrying a pellet gun on school property. He was arrested and charged with Terroristic Threatening 2nd, Menacing, and Disorderly Conduct, 2nd.

We are thankful for our SRO (school resource officer) program and for our local police authorities. Having an SRO on campus allowed for this situation to be handled quickly. The local authorities were very quick to respond, also.