Selena Browning icing the game at the free throw line for Tolsia. 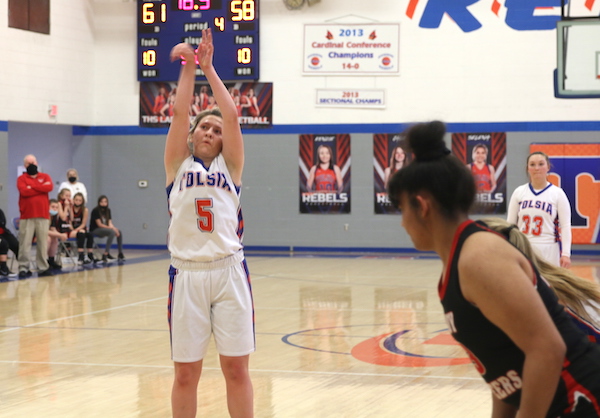 Tolsia, who is ranked #9 in class single A, fell behind 21-8 after the first quarter but did not panic one bit.

The Rebels fought back in the second quarter and trailed 29-22 at the break.

In the third they took the lead 43-42 and never wavered the rest of the way and closed out the victory by going 11 of 15 at the charity stripe.

Kerigan Salmons drilling a three pointer in the fourth quarter against Wayne. 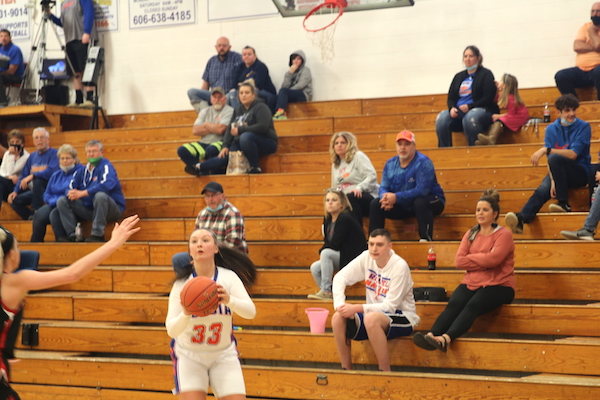 The Rebels hit 3 three pointers and went 15 of 26 from the foul line.

The Pioneers hit 4 three pointers and went 12 of 20 from the foul line.

Autumn Block starts her drive to the basket in the first half versus Wayne. 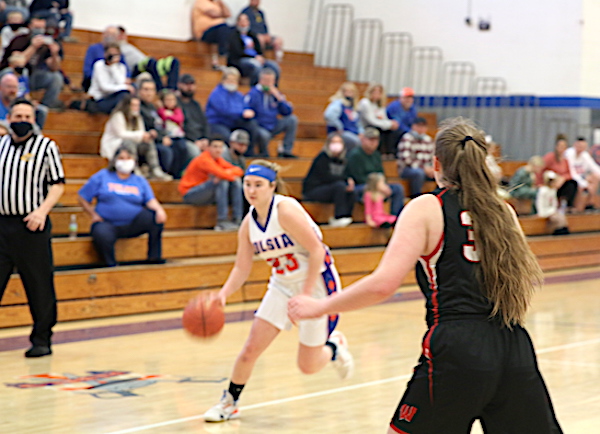 The Rebels made the long trek to Bradshaw in McDowell Co. to face the #8 Raiders who scored with 2 seconds left to get the one point victory.

Selena Browning hit a long three pointer with 15 seconds left to give the Rebels a one point lead before River View scored to win it. Tolsia trailed by 21 points in the second half.

The Rebels hit 5 three pointers and went 17 of 23 from the foul line.

The Raiders hit 4 three pointers and went 7 of 19 from the foul line.

Championship game is slated for Thursday April 15th at the Logan Fieldhouse at 7:00.

“… It was a great win and it really shows what our girls are capable of. It’s been a long week, we got rained out on Wednesday at Charleston Catholic. We had three games cancelled for various reasons and the girls still had to show up for practice even though they were expecting to play a game. They have been through the ringer.”

“… We were in Bradshaw on Friday and were down 21 points and took the lead with 10 seconds left on a long three pointer by Selena Browning and did everything they could to win the ballgame and it just wasn’t meant to be. They built off of that against Wayne and you could see that down the stretch. I’ve said it many times this year that we played a brutal schedule and these girls have seen everything you could possibly see to prepare you for the postseason tournament. I’m super proud of all the girls, they excepted the challenge this season and have took their lumps. Long trip to River View and then to come back today after starting slow against a very good Wayne team that is ranked #3 in triple A. Give them a lot of credit for the season that they are having and they will be a tough out in postseason play. For us it is a huge win to get us ready for the sectional tournament and a week or so. Big big win against Wayne.”