Lawrence Co Deputies discover 40 g of meth and thousands of dollars in suspected stolen goods in the Blaine community. 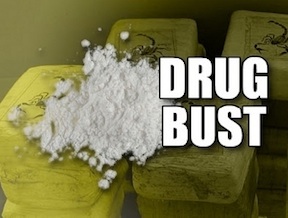 On Saturday April 3rd Deputies found over 40 g of methamphetamine and thousands of dollars in suspected stolen goods while looking for a wanted fugitive in the Blaine community.

Deputy Wells & Deputy Castle went to a residence in an attempt to locate Dave Michael Ferguson. Ferguson is ,, wanted on multiple felony charges including a felon possessing a firearm & trafficking methamphetamine.
Unable to locate Ferguson inside the residence, deputies looked around the property and noticed equipment that was similar to items that were recently reported stolen. Based on this probable cause, a search warrant was obtained.
While waiting to serve the search warrant, Deputy Wells noticed a truck parked adjacent to the property that matched a description of a vehicle Ferguson was recently seen in. SGT Keefer & Deputy Wells approached the truck & was given permission to search by the driver & found 15 grams of meth, scales, and cash inside. After serving the search warrant they found another 25 grams of meth inside a different truck on the property, which was parked adjacent to the stolen items.
Assisting on this search warrant, District 3 Constable Jeff McCarty.

This is an open investigation & Sheriff Jackson asks that if you’ve reported stolen items recently to please be patient as more information will be released as soon as it becomes available. If you know the whereabouts of Dave Ferguson to please call the sheriffs office.