GROWING UP IN LOUISA: Helping Mom

What with this holiday we are celebrating this week, my mind went back to those ‘growing up’ years of what is getting to be a long time ago. Yes, we celebrated Christ’s resurrection at church, but frankly in looking back I’m not totally sure the adults in my family even discussed the religious aspects of Easter other than a by-the-way reason for the occasion. We had Easter baskets with candy with paper grass, and new, special outfits to wear, but they left it to our Sunday school teachers to explain the real meaning of Easter. I ate the candy but I still don’t get the connection between candy and bunnies, with the resurrection. All that confusion aside and considering holidays in general, I am reminded of the important side benefits of coming together with friends and family. It is at those times that we bond and learn about life.

Those of us that had a mom that understood the importance of teaching their children through example were blessed beyond understanding. Not only were the benefits of learning important, but the time and subsequent bonding are all important. In some cases those lessons came from a grandmother, but how lucky were we who had turns with each. The mother, or mother figure, was blessed, too, as they saw us grow and apply those lessons in our lives. Even generations later we remember the good times working toward a goal with mom. 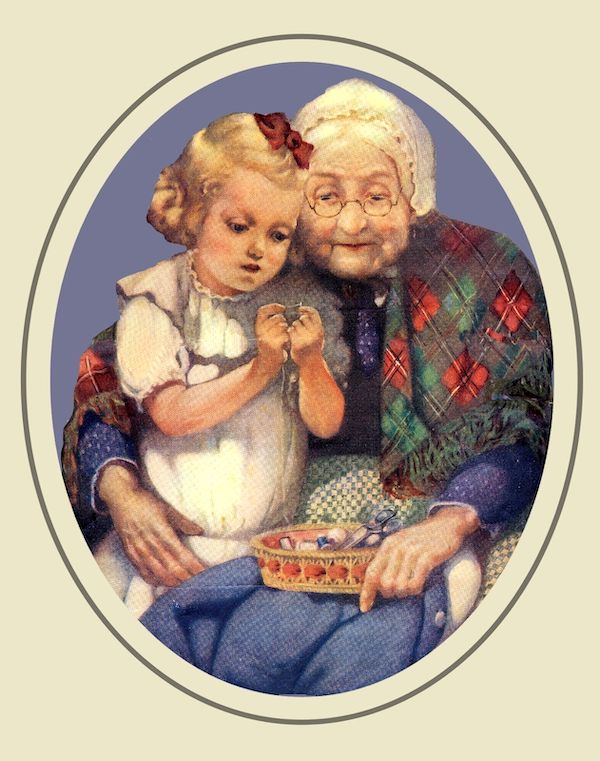 I know many girls who sat at the feet of their mothers while mom sewed a dress, apron, or some other items? Soon, it was their turn as the machine whirled and seams were carefully matched and pinned. It was often the grandmother who demonstrated quilting, knitting, and other crafts to their daughters and granddaughters. Some took extra training in home economics classes. Those were fun, but how much more wonderful it was to have time together with mom or granny.

It was mostly cooking for me, although I was shown how to make an Easter egg, plant some radishes, make a bed. Yes, boys can do housework but we’d rather keep that a secret.

Thinking back, I remember when mom had me come into the kitchen with her. She was making something she said was really special. I had known of mom fixing ‘specials’ before and knew I wouldn’t want to miss out on this moment in time. When I entered the kitchen I saw that she had some lard warming on the gas range in a big skillet or saucepan. She had also prepared a big lump of dough on the enameled pullout shelf that was part of the cabinet. A big bag of flour stood open that had been the source of this early activity and would soon enough have other uses.

As I watched her fold and knead the dough, she continually sprinkled flour on her hands, the cabinet, and on the pile of dough. It wasn’t long before it was also on my hands, my hair, my face, and my clothes. Finally, after having me help with kneading the floury lump, she took a rolling pin and floured it so it wouldn’t stick to the dough. She rolled it out flat but not as thin as she did with biscuits. Once flat, she gave me a tin cutter that was shaped like a circle within a circle. With this, I cut out a doughnut and also the middle. Mom put the delightful roll into the hot grease. I watched while the doughnut swelled when it made contact with the grease. After a minute or so mom took a wooden spoon and flipped the floating doughnuts over so the other side would be cooked. Then she lifted each doughnut and doughnut hole out and laid them on a rack and sprinkled them with powdered sugar. I got that in my hair, too, but especially on my now sticky face. Mom had me taste one of the middles (holes) when it cooled. Yum!

She did this several times over the years, always having me lend a hand. Some were covered with dustings of confectionary sugar, but she also used a chocolate or sugar glaze at other times. Most of the yummy confections had the consistency of cake while at other times they were very light weight ‘yeast’ donuts. No matter which kind, or how many she made, there was never enough. We gobbled them down while they were still hot. The donuts were but a memory well before we got our fill. 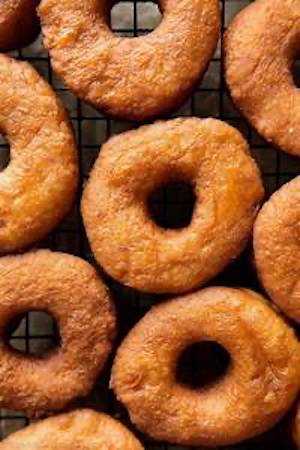 Doughnuts that are made by bakeries, doughnut shops, or grocery franchises are good, but they pale to those made by mom. For sure, in many cases store bought donuts were much fancier than mom’s, but they still didn’t compare with the taste of hers, not to mention the comforting and sweet time I spent with her making them. As a consumer, I was spoiled, for sure. Boxed donuts at the grocery have a bitter taste compared to the ones mom and I made. Most importantly, they just didn’t have mom’s special touch.

She sometimes made treats that were very like doughnuts. Some were baked rather than fried. I’m talking apple fritters and apple strudel. These are wonderful delights unless like me you are trying to lose weight. I’ll likely pick up a pound or two just writing this article. On the other hand, if I’m going to gain weight anyway, I may as well reach for another donut.

We used to have occasional family events that were a gathering of relatives around holidays. In the warm weather seasons we’d eat lots of cake, watermelon, hot dogs, hamburgers, and some homemade ice cream. Again, it was not only a time of stuffing ourselves but of bonding. Taking turns cranking the ice cream maker, or adding rock salt or more ice, gave us all things to do to contribute to the festivities. At the end of the day we all fell back on overstuffed chairs and sofas with our stomachs full and swollen. How sweet it was to fold our hands, close our eyes and slumber if only for a moment.

I remember when I was about five or six years old that one of my uncles got up from his after dinner rest and called us to join him in the kitchen. Shaking off their grogginess my cousins George, Julia, and maybe 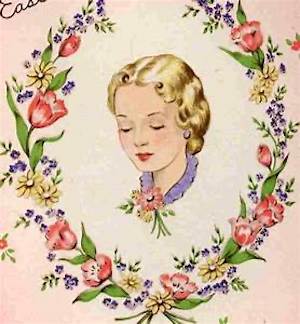 others of the kids went with him into the kitchen. Once there my uncle took out some ice cream and put a scoop or two into a big, tall glass. He pulled out a bottle of ginger ale and poured it over the ice cream. It fizzed and grew a foamy head as it filled up the glass. He added a straw and spoon and handed this drink he called a float to each of us kids. This became a popular treat in our household whenever we had guests or wanted to make memories we might one day share. It was something special. I still make them from time to time and still enjoy them.

For most of the world it is the season for chocolate bunnies, Easter eggs, and jelly beans. The important part is celebrating the risen Christ. That tomb of long ago stands empty and is therefore our hope. We have faith that the circle will be unbroken and the family will be together again. Perhaps we will sew a new Easter outfit or maybe enjoy a sweet pastry together once again. Meanwhile, we must keep the faith and continue to love one another. May God bless us, one and all.