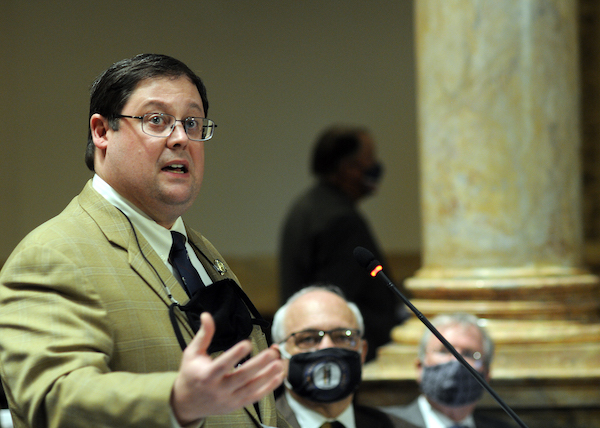 The final two days of this year’s 30-day legislative session required the burning of the midnight oil. Before adjourning sine die, the legislative process required a lot of “hurry up and wait.” However, I did enjoy the brief windows of opportunity to enjoy the pleasant weather on my trips from my legislative office to the Senate Chamber in the State Capitol. After a rough stretch of weather, I hope you were able to enjoy some of the sunshine and warmth as well. As I departed from the State Capitol in the early morning hours of Wednesday, March 31, I left with a sense of pride and was pleased with what the General Assembly was able to accomplish.

To adjourn “sine die” means without assigning a day for a further meeting or hearing or to close official business for an indefinite period. For legislators, the phrase means the current legislative session has ended.

Much of the work on the session’s final two days were considerations of overriding vetoes that the Governor issued. By the conclusion of the 2021 Session at 11:47 p.m. on Tuesday, March 30, the legislature successfully overrode over two dozen of the Governor’s vetoes. I want to highlight a number of those in this week’s legislative update and share with you some information on the appropriation of funding for some exciting initiatives that will make Kentucky stronger. But first, I want to mention a couple of other bills that are important to our value and our region.

After a lengthy process, I am thrilled to report that a bill previously known as Senate Bill (SB) 75, which permits the limited use of OHVs and ATVs on public roadways, passed the General Assembly as part of SB 215.

This bill will allow the designation of all or portions of state roads to develop the trail systems in Eastern Kentucky as envisioned by the Pike County Trail Advisory Board and the Kentucky Mountain Regional Recreation Authority.

I want to thank the many folks who have worked with me on this bill, including Representative Chris Fugate, Representative John Blanton, Representative Angie Hatton, Representative Ashley Tackett-Laferty, Senate Transportation Chairman Senator Jimmy Higdon, Senator Johnnie L. Turner, and especially Senate Majority Floor Leader Damon Thayer who gave the bill its final push at the end. I would also like to thank Legislative liaison Kenny Bishop at the Kentucky Transportation Cabinet and Brandon White of the Legislative Research Commission for their advice and efforts in making this legislation a reality. I cannot leave out the dedicated members of our Pike County Fiscal Court, Judge Ray S. Jones, Commissioner Jason Tackett, Commissioner Ronnie Robertson, and Commissioner Brian Booth, for their efforts promoting OHV tourism. Citizen members of the Pike County Trail Advisory Board, Eric McPeek and Clif Smallwood, were also instrumental in gathering the public support necessary to pass this bill. This was indeed a bipartisan, team effort for the betterment of our entire region.

This bill now heads to Governor Andy Beshear for his signature. Based on my conversations with many people in his administration, I feel that our Governor recognizes the possibilities of adventure tourism in Eastern Kentucky and will sign this bill.

Another bill to pass was House Bill (HB) 91, and it is not subject to a Governor’s veto. It is a constitutional amendment that will now be proposed to Kentucky voters on the 2022 November election ballot. If supported by a majority, the amendment would add a new section to the Constitution of Kentucky, stating that it does not secure or protect the right to abortion or funding of abortion. HB 91 makes sure a rogue court does not disenfranchise Kentucky and that it is the General Assembly that makes the law concerning the lives of our most vulnerable citizens, the unborn human child. I encourage your support of this constitutional amendment when you cast your vote next year.

SB 65 ends a regulation issued by the administration that has allowed SNAP benefits (formerly known as food stamps) to be given to non-custodial parents who are delinquent in their child support. The legislature finds it inappropriate to be rewarding parents with benefits when they are not providing for their children—not only as a moral obligation but a court-ordered one, for that matter.

SB 251 reorganizes the Office of the Kentucky Attorney General (AG) and allows the AG to bring an action challenging the constitutionality of Kentucky’s laws, orders, or regulations in any county where the alleged constitutional harm has occurred. Currently, all challenges to state law are required to go through the Franklin Circuit Court simply because the seat of state government is physically located in Franklin County. This essentially makes a super circuit where only two judges preside over matters that impact the entire state. There are plenty of qualified judges and circuits across the state that are perfectly capable of hearing these cases. SB 251 will help remedy those concerns and prioritize the citizens’ rights over the convenience of the state.

Other veto overrides, and additional legislation that passed can be found at legislature.ky.gov. Several bills were not veto overrides that passed and are subject to the Governor’s veto. I anticipate that he will support many of those measures, including utilization of the federal American Rescue Plan Act of 2021 (ARPA) appropriations.

The general assembly approved multiple beneficial appropriations in the final two days of the session. Some of this is the result of funding provided through ARPA. New expenditures in the state budget, perhaps most notably, included $140 million to fund all-day kindergarten. School districts are currently finding ways to fund all-day kindergarten, but this additional funding to offset their costs will be helpful.

Additional appropriations included but are not limited to:

We received good news from the federal government late last week that President Biden approved Kentucky’s federal disaster declaration following the severe storms that impacted parts of Kentucky earlier this year. It appears that Elliot, Lawrence, Martin, Morgan, and Pike Counties in the 31st District are eligible. As a Mountain Caucus member, I am grateful for the administration’s work in requesting federal assistance. All of our local officials deserve recognition as well for their efforts to assess the damage. According to the federal government’s announcement, money will be available to local governments and certain private nonprofit organizations on a cost-sharing basis for emergency work and repair or replacement of damaged facilities.

Note: Senator Phillip Wheeler (R-Pikeville) represents Kentucky’s 31st State Senate District, which includes Elliott, Lawrence, Martin, Morgan, and Pike Counties. Senator Wheeler is Vice-Chairman of the Senate Standing Committee on Economic Development, Tourism, and Labor. He also serves as a member of the Senate Standing Committees on Transportation, Natural Resources and Energy, Judiciary, and State and Local Government. Additionally, he is a member of the Capital Planning and Bond Oversight Statutory Committee. For a high-resolution .jpeg of Senator Wheeler, please visit: https://legislature.ky.gov/Legislators%20Full%20Res%20Images/senate131.jpg