Tyler Johnson surveys the floor against St. Joe on Saturday. 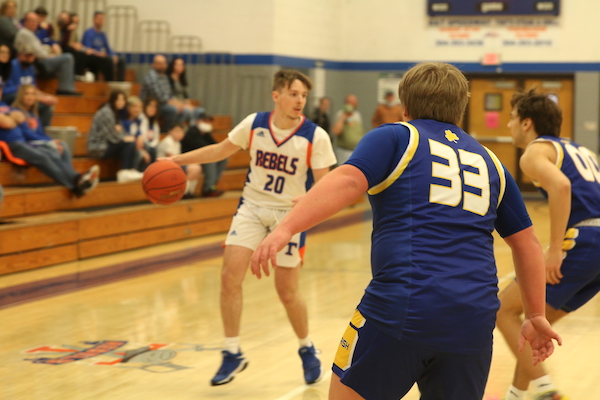 Rob Cantrell headed to the basket for two of his 19 points Saturday. 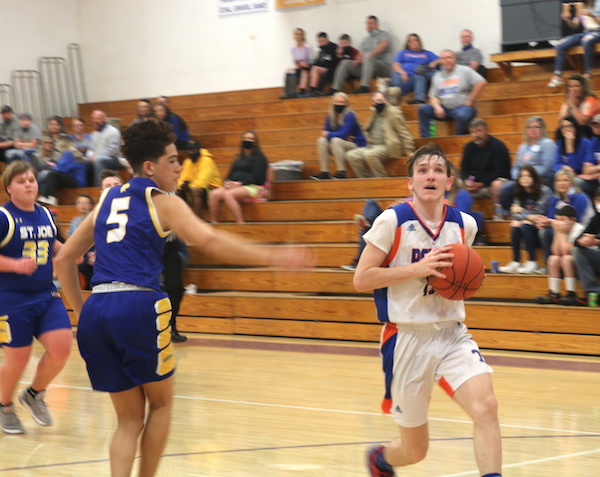 The Rebels hit 7 three pointers and went 4 of 6 from the charity stripe.

The Fighting Irish hit 4 three pointers and went 5 of 10 from the foul line.

Tolsia is currently on pause because of contact tracing until at least this weekend.

“… We were supposed to play South Harrison today in the WV HIT but they had to go into quarantine. We appreciate Ryan Taylor and St. Joe for agreeing to move the game up from next week. I thought we moved the ball better today and didn’t take ‘my’ shot we took ‘our’ shot. The last two or three games that has been the case. We were balanced even though I thought we could have attracted the gaps a little better. They really extended their defense out and put pressure on us.”

“… Overall I’m pleased with the victory. I thought our transition offense was good as well. We want to race the ball down the court but not force things. We have a tendency to do that from time to time but today was a lot better. If it’s not open we want to pull it back out and get into our secondary offense and set something up. Proud of our guys today and excited for the rest of the season.”