BOTH SUSPECTS WERE FROM SEPARATE COUNTIES SOUTH OF LAWRENCE COUNTY; SO THEY CAME THIS FAR AWAY JUST TO DO THIS TYPE OF GOOFY CRIMINAL ACT? 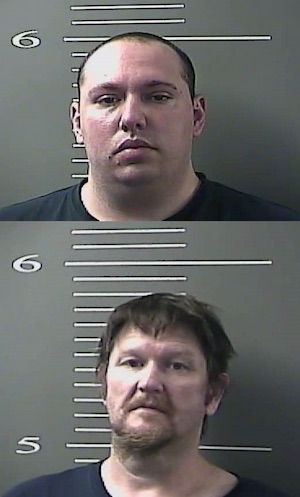 THE MISADVENTURES OF THE JERKY BOYS: RICKEY PAULEY & KEITH R. ALE. WHO WERE ARRESTED EARLY TUESDAY EVENING IN LOUISA ON NUMEROUS CHARGES, AFTER FLEEING FROM POLICE DUE TO STEALING A ‘CAR LOAD’ OF BEEF JERKY FROM THE LOUISA WALMART.

Two men, one from Floyd County, and the other from Knott County, were arrested following a police pursuit over stolen beef jerky in Louisa early Tuesday evening.

According to the Lawrence County Sheriff Department, Ale R. Keith, 47, of Mallie, Ky, (located in Knott County) and Rickey Conley, 32, of Lackey, Ky. (located in Floyd County) were arrested on felony theft charges and other offenses.

Louisa Police Department sergeant Steven Wilburn was responding to an alert of a person trying to take numerous items from the Louisa Wal-Mart without paying for the merchandise.

That person, later identified as Keith Ale, ran from sergeant Wilburn and jumped into the backseat of a vehicle, and the driver quickly drover away from the WalMart parking lot.

The driver of the vehicle, later identified as Rickey Conley, ran multiple stop signs and a red light while fleeing the scene.

Sergeant Wilburn. along with Louisa officer Miuchael Housinger, who was joined by deputies with the Lawrence County Sheriff’s Department, stopped the vehicle on U.S. 23. There was a large plastic tote inside the vehicle containing multiple items, including “a large quantity of beef jerky.”

The total of the stolen items taken was over $500.

Rickey Conley was arrested by sergeant Steven Wilburn of the Louisa Police Department , and was charged with:

Keith R. Ale was arrested by deputy Everett Chase Kirk of the Lawrence County Sheriff Department, and was charged with:

No word if the two suspects had intake any dubious amount of weed, or any other drugs that led them to undertake their daring but ill-fated caper quest to quell their munchies for a bucket load of beef snacks, or if they were instead just two out of town sober stupid blooming ‘jerks’.