FRANKFORT, Ky. (March 22, 2021) – On Monday, Gov. Andy Beshear signed House Bill 95 (HB 95), protecting the health and lives of Kentuckians with diabetes by capping the cost of insulin at $30 per 30-day supply for those with state-regulated health care plans or plans purchased on the marketplace exchange, state employees and people under group plans. 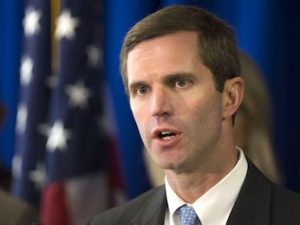 Before it was sent to the Governor’s desk, HB 95 passed the Kentucky House of Representatives and Kentucky Senate without a single negative vote.

The Governor also signed 12 other bills that support and expand quality health care for Kentucky families. He vetoed five bills that would strip power from the executive branch, in some cases violating the Constitution or risking significant taxpayer dollars.

“Health care is a human right,” said Gov. Beshear. “Capping the cost of insulin was the right thing to do to support every Kentuckian who has had to risk their own life or be afraid of permanently damaging their health just because they could not afford insulin. Today, they no longer have to live in fear – now this lifesaving medicine is affordable.”

“My son, Alex, lives with Type 1 diabetes. Standing here today, we can’t prevent other moms from receiving the same news I got in that hospital 14 years ago. But we can make sure that when they receive that diagnosis, they know that they won’t have to choose between bankruptcy and keeping their child alive,” said Rep. Patti Minter (D) of Bowling Green, who co-sponsored the bill. “Thank you to Gov. Beshear, for your commitment to expanding health care as a basic human right.”

“The price of insulin has nearly tripled between 2002 and 2013, even though the cost of production has stayed relatively stable,” said Rep. Danny Bentley (R) of Russell, who co-sponsored the bill. “As a Type 1 diabetic, I understand firsthand how scary it can be when you can’t afford your medication. We need to ensure those who need this lifesaving medication can always access it. This bill is meant to keep people healthy, keep people productive and decrease the cost of complications related to diabetes. Thirteen other states have already passed similar measures, and it’s time for Kentucky to do the same.”

“I want to extend my gratitude to Rep. Danny Bentley, Rep. Patti Minter and to every member of the House and Senate who voted yes on this measure, and who got to see just a glimpse of how immoral the rising cost of insulin really is. Much more has to be done, but HB 95 is a step forward,” said Angela Lautner, Kentucky #insulin4all legislative lead. “We must continue this momentum into the next session. Access to insulin is a human right and we stand ready to work with every member of the House and Senate in the future as we continue our work for insulin for all, for every single Kentuckian.”

In addition to capping the price of insulin, HB 95 also requires health care benefit plans to provide the needed equipment, supplies and outpatient training and education to help diabetics stay healthy, and forbids any reductions from this coverage by others involved in coverage.

More than half a million Kentuckians have diabetes; Kentucky ranks seventh-highest in the U.S. for diabetes prevalence. While companies pay $2 to $7 to manufacture a single vial, some Kentuckians have had to pay more than $1,000 a month for their lifesaving supply.

In 1923, the inventors of insulin sold their patent for just $1 specifically so this critical drug would be available and affordable for diabetics everywhere, but before HB 95was signed, in Kentucky, the price-gouging of insulin undermined its creators’ commitment to making it accessible.

Many Kentuckians who have diabetes, including a former state representative, have been forced to ration insulin due to its high cost, even though doing so could kill them. The Governor said HB 95 will ensure more Kentuckians are protected from that impossible choice.

House Bill 50
The Governor believes Kentucky must increase access to treatment for mental health and substance abuse disorders to help individuals who need these services. HB 50 provides the Department of Insurance with a necessary tool to review the processes of insurers and remove any barriers to providing coverage for mental health and substance use disorder services in the same manner that coverage for medical and surgical services is provided.

House Bill 140
Gov. Beshear supports the momentum for telehealth services that has been accelerated and escalated with the onset of the coronavirus pandemic. This new law will also support the telehealth delivery of care and services for the long term in accordance with HIPAA, clinical and technological/IT security standards.

House Bill 183
The Governor supports this measure, which would help ensure ongoing viability of hospitals across the state, so every Kentuckian can receive care close to where they live.

House Bill 219
The Governor supports this bill which would increase accessibly of syringes and advance the Cabinet for Health and Family Services’ Harm Reduction Strategy by making syringes and naloxone easier to purchase, empowering all Kentuckians to help save lives as the commonwealth battles the opioid epidemic.

Senate Bill 55
Gov. Beshear supports eliminating charges to Medicaid beneficiaries that include copayments and co-insurance and might discourage individuals from seeking medical help, because all Kentuckians deserve quality health care.

Senate Bill 74
The Governor supports this bill renaming the Office of Alzheimer’s Disease and Related Disorders. Its new name, the Office of Dementia Services, will better reflect the office’s focus and scope.

Senate Bill 154
The Governor supports this measure because expanding the class of providers who supervise home health services and expanding health care services will better meet the needs of Kentuckians.

Senate Bill 163
The Governor supports this bill which recognizes the contributions of charitable health care providers and their impact improving the lives of Kentucky families.

House Bill 275
The Governor does not support House Bill 275 because it violates the Kentucky Constitution in that it subjects the executive power placed with the Governor to the control of the state treasurer.

House Bill 394
The Governor does not support House Bill 394 because it reduces oversight and gives the Kentucky Fish and Wildlife Commission unchecked authority to choose the commissioner of the Kentucky Department of Fish and Wildlife Resources regardless of qualifications; to set the commissioner’s salary, no matter how high; to enter into a contract with its commissioner on its own terms even if they violate state law; and to have the sole power over its contracts without any oversight.

House Bill 518
The Governor does not support House Bill 518 because it undermines the importance of agriculture in the commonwealth and puts hundreds of millions of taxpayer dollars at risk by allowing the State Fair Board to have complete control of its contracts with little to no oversight.

Senate Bill 93
The Governor does not support Senate Bill 93 because it is unconstitutional and undermines the importance of agriculture in the commonwealth. This bill aims to remove the Governor’s involvement in the State Board of Agriculture – a board that has always been in the executive department.

Senate Bill 228
The Governor does not support Senate Bill 228 (SB 228) because our nation’s founders enacted the 17th Amendment to the U.S. Constitution to remove the power to select United States senators from political party bosses. SB 228 violates the very purpose of this amendment by returning that power to political parties in the case of a vacancy.

“These bills violate our Constitution, chip away at our strong separation of powers and unlawfully attempt to restrict the Governor’s executive powers,” said Gov. Beshear.