DRONE VIDEOS CAPTURES FULL EXTENT OF THE MAJOR FLOODING IN LOUISA THIS WEEK, WITH BIG SANDY HIGHEST IN LOUISA AND FORT GAY AREAS IN NEARLY 45 YEARS

MARCH 4, 2021 – written by WADE QUEEN
As the city of Louisa, Lawrence County, and much of the rest of Eastern Kentucky slowly recover from Sunday night’s heavy rains that led to the severe flooding throughout this part of the state, newly found the aerial footage shows the severe amount of flooding in and around much of Louisa and Fort Gay as well with city officials saying that the river was at its highest levels in Louisa and Fort Gay areaf since 1977.
The Louisa city Police Department used the department’s drone this week to shoot several short videos showing the severe amount of flooding throughout parts of Louisa including the flooding of the water plant number two at Eloise that led to boil water advisories and no water & low water pressure issues.
The breathtaking views that are shown in the videos clearly reveal the extent of the major flooding in Louisa and also it reveals the fact the floodwaters are only slowly receding at a very small rate, even though the videos were shot two and three days after Sunday nights rains. 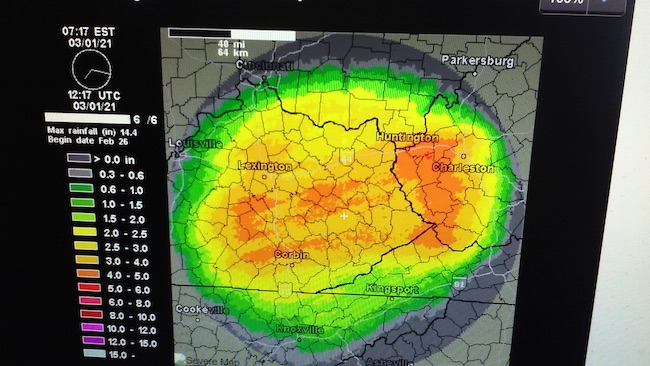 SUNRISE RAINSHINES: MONDAY MORNING RADAR IMAGE SHOWING THE RAINFALL GAUGE TOTALS FOR THE PREVIOUS 24 HOURS.
Lawrence County received the general 4 inches of rain throughout Sunday into the night except for an area between Louisa in Yatesville Lake as well as parts of southern areas of Lawrence County received up to six inches of rain on Sunday night, and in addition Lawrence County had also received significant rainfall on both Friday and Saturday before the Sunday hard rains.
However our counties to the south around both of the border rivers that suffered the most severe flooding, as they not only did they receive several inches of rain on Sunday, but also received 1 to 2 inches of rain each on Friday and again on Saturday. That much rainfall &  coupled with the fact our southern neighboring counties, along with up river southern West Virginia counties, have much more steep ground terrain, which led to the catastrophic flood waters and torrential runoff that pushed water river levels to increase into a once in a half a century depths and heights.
For those who wish to check out the footage of the drone videos showing the flooding around Louisa (there are five videos in all); can see the videos by clicking on and follow the links below:
VIDEO 1.
VIDEO 2.
VIDEO 3.
VIDEO 4.
VIDEO 5.
ShareTweetShareSendPinShare
Next Post