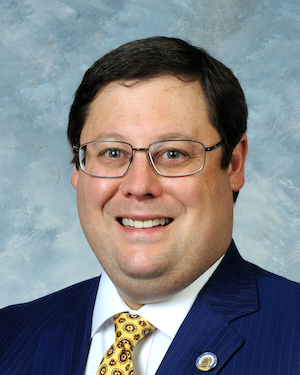 Severe winter weather forced the Kentucky General Assembly to pause regular session activity during the week of February 15. My colleagues and I returned to Frankfort on Monday to resume legislative work on your behalf.

I hope that you and your family remained safe during the period of heavy ice and snowstorms. We really cannot say enough about the men and women who work to keep the roads clear and the lights on. Stories across the commonwealth included county personnel helping other counties, emergency efforts to get necessities to people who were without, and so much more. During times of crisis the general good in people shows through, and the storm is braved together. Thank you to all involved in helping restore normalcy.

Upon legislators returning to Frankfort, the House and Senate got back to work on crafting and passing legislation, including continued work on the state budget.

I am proud to report that several bills I am carrying in the state senate took further steps towards enactment this week. They included Senate Bills (SB) 75 and 86 that cleared the State Senate.

SB 75 will further the development of recreational off-highway vehicle trail development in Eastern Kentucky. After numerous meetings with stakeholders and fellow members of the General Assembly, I am grateful to see the bill clear this hurdle, and I pray for its success in the State House.  If you are interested in the development of ATV Tourism in Eastern Kentucky and the other rural area of the Commonwealth, please contact your local House members and encourage them to vote for SB 75.

SB 86 authorizes local governments to adopt ordinances against open dumping of solid waste on land and in water and impose a civil fine of not less than $250 and not more than $500. The bill would also assure that any revenues resulting from local ordinances are returned to the counties in which they are imposed.  This will enable our cash-strapped counties to have the necessary funds to clean-up illegal dumps while enabling them to avoid passing them onto responsible taxpayers.

Another bill I supported that passed the Senate was SB 141, which will help our miners. These are workers and families I have represented throughout my legal career. It is important to me and to our region that we do right by them. The bill sets guidelines for distributing funds remaining in the Kentucky coal workers’ pneumoconiosis fund after all its claims are paid. It would allow for the distribution of funds claimed by coal companies to pay wages and amounts owed to counties, cities, school systems, school districts, and more. Finally, it provides for excess funds to go to unpaid workers and to the Kentucky coal employers’ self-insurance guaranty fund

A few priority bills continued through the legislative process this week. They included SBs 4, 6, 7, and 10.

SB 4 establishes procedures and requirements for the issuance of a warrant that authorizes entry without notice while maintaining the ability to act in situations involving a violent offender or life and death situation. Applications for warrants would have to be reviewed impartially by a judge and conducted in service with a SWAT or special response team whose members are trained for special situations. Additionally, due process protections would be put in place, making any evidence collected in violation of the provisions of the law inadmissible in court. SB 4 serves to make dangerous circumstances safer for both law enforcement and the public while strengthening the public trust in agencies.

SB 6 enacts new safeguards to ensure ethical behavior within the executive branch, particularly regarding members of gubernatorial transition teams’ actions and behaviors. Transition teams consist of folks who help a governor-elect transition from candidate to the official office. They will help select individuals who will serve in the various positions within the governor-elect’s administration and help determine policy goals and the general framework of the new administration.

If passed, SB 6 would require the existing Executive Branch Ethics Commission to set ethical conduct standards related to transition teams by developing a standard of ethical conduct agreement for transition team members to sign. It would apply to all members of a transition team and address the role of registered or former lobbyists. Members would be required to disclose certain information, such as their current employer, boards on which they serve as a member, and any non-state sources of funds they receive for their, or their spouses’, services. Additionally, the bill would prohibit transition team members from accessing non-public information regarding matters that could personally benefit them or their spouses, clients, or businesses they may belong to.

SB 7 directly addresses a challenge related to the unemployment insurance issue. Due to the system, some benefits were awarded to people who did not qualify for them. This is to no fault of the recipients. SB 7 would establish a means by which recipients of overpayments could request a waiver to avoid paying those funds. Recipients would have to respond with a waiver request within a specified timeframe from the date the Secretary of the Labor Cabinet deposits a notification in the mail.

On a related note, the General Assembly received testimony from State Auditor Mike Harmon on his recent findings that over 400,000 UI-related emails remain unread. The report also cites overpayments made to recipients. I encourage you to watch that testimony that took place during a meeting of the Senate Standing Committee on Economic Development, Tourism, and Labor. It is available online at ket.org/legislature/archives.

SB 10 also made passage in the Senate. I think this measure can lead to meaningful dialogue and create a conducive environment for considering solutions for challenges facing communities across the commonwealth. If passed, SB 10 would establish a Commission on Race and Access to Opportunity within the legislative branch to conduct studies and research where disparities may exist across sectors of educational equity, health care, economic opportunity, criminal justice, and more. The commission established would have the authority to hold monthly meetings, seek comment and testimony from various individuals and organizations, and provide research to recommend data-driven policy initiatives.

During this time of great divisiveness, I think it’s essential we consider the benefit of sitting with others in honest, open conversation with the intent to listen. No, that will not always lead to an agreement on policy, but it will lead to better understanding and rapport. While we all come from unique backgrounds, endeavors like SB 10 promote clearer pathways. I sincerely hope so.

Other bills passing in the Senate included:

SB 55 prohibits copayments or cost-sharing from being paid by any medical assistance recipients. It prohibits deductibles, copayments, and coinsurance requirements for Medicaid telehealth services and copayments charged in the Kentucky Children’s Health Insurance Program (KCHIP). SB 55 applies to Medicaid Services or any managed care organization (MCO) contracted by the Cabinet for Health and Family Services.

MCOs have long failed to reimburse for medical services. This has placed financial burdens on hospitals and driven up administrative costs. Another bill seeks to mitigate the challenges MCOs have created.

SB 65 nullifies administrative regulations that were found deficient during the 2020 interim period and prohibits their re-enactment for a designated period if identical to or substantially the same. One regulation the legislature found deficient last year would have provided Supplemental Nutrition Assistance Program (SNAP) benefits to parents of children who have chosen to be absent in the child’s life.

SB 115 seeks to build on the Read To Achieve (RTA) Program’s tremendous success. The bill would works to replicate proven methods across all school districts’. Many students have benefited from the RTA Program, so we should expand access to more students.

SB 131 Moves the Motorcycle Safety Education Commission and Program—which offers motorcycle rider training courses for novice and experienced riders—from the Justice and Public Safety Cabinet to the Kentucky Transportation Cabinet’s Office of Highway Safety. It also allows residents of other states to take rider training courses in Kentucky if they are eligible for a motor vehicle instruction permit in their home state.

SB 135 relates to the postsecondary education performance fund. The bill revises the definition of “formula base amount” and establishes a definition of “funding floor” for purposes of priority funding for Kentucky institutions. SB 135 would add a hold-harmless and stop-loss prevention of 0% for the upcoming fiscal year and beyond. It also establishes how amounts distributed from the performance fund should be treated during the budget process.

SB 148 declares the need for childcare in our communities as essential by requiring CHFS to identify emergency care providers who offer vital child care services during a state of emergency. It addresses a problem many families have struggled with throughout the last year concerning available childcare. The bill would return childcare classroom sizes to pre-COVID numbers and allow them to combine classes during the opening and closing hours once again.

As you can see, the General Assembly is not taking any time for granted. We are now past the halfway point of the 2021 30-day session, with much work left to do.  I will continue to provide weekly legislative updates in the weeks ahead.

Note: Senator Phillip Wheeler (R-Pikeville) represents Kentucky’s 31st State Senate District, which includes Elliott, Lawrence, Martin, Morgan, and Pike Counties. Senator Wheeler is Vice-Chairman of the Senate Standing Committee on Economic Development, Tourism, and Labor. He also serves as a member of the Senate Standing Committees on Transportation, Natural Resources and Energy, Judiciary, and State and Local Government. Additionally, he is a member of the Capital Planning and Bond Oversight Statutory Committee. For a high-resolution .jpeg of Senator Wheeler, please visit:https://legislature.ky.gov/Legislators%20Full%20Res%20Images/senate131.jpg