Trenton Adkins getting congrats from his teammates and instructions from assistant coach Kenny Muncy. 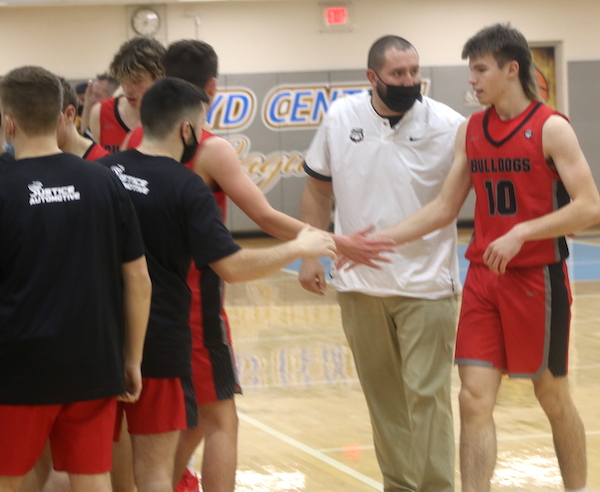 The Dawgs led 21-14 after one quarter and 38-29 at halftime behind Adkins who scored 19 first half points.

Lawrence Co. extended their lead in the third quarter with a 21-10 advantage and cruised to their second victory at Floyd Central in the last ten days.

The Dawgs hit 4 three pointers and went 6 of 8 from the foul line.

Floyd Central hit 4 three pointers and went 20 of 29 from the foul line.

The Bobcats ( 8-5 ) wrapped up the number one seed in the 58th District tournament after dispatching of the Dawgs Saturday night.

# 1 Cody Maynard with the assist to his teammate Saturday versus Betsy Layne. 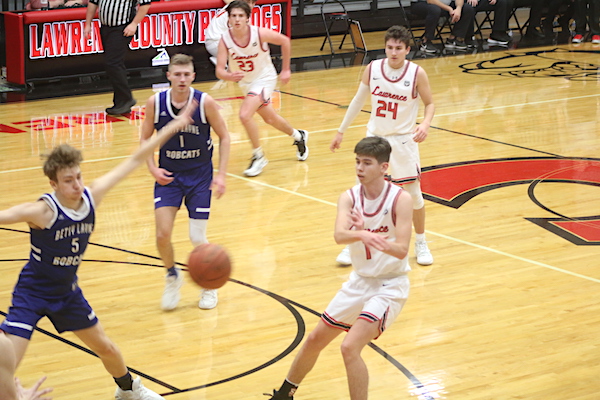 The Bulldogs hit 4 three pointers and 7 of 10 free throws.

The Bobcats hit 5 three pointers and went 21 of 23 from the foul line.

The Dawgs will travel to Prestonsburg ( 5-7 ) tonight in another 58th District game.

“… We were in the gym for about three hours yesterday together and I really don’t like to do that especially on a Sunday but we felt like it was necessary and we challenged the guys and a really hard and intense practice. I didn’t think we played hard enough against Betsy Layne on Saturday and it showed. They definitely played harder then us and it really showed on the scoreboard so give them credit for that.”

“… Against Floyd Central I thought the guys played hard from the opening tip to the final buzzer. I can’t not complain one bit about tonight’s effort. Been a tough week for us and a lot of people around Lawrence Co. and continue to pray for everyone affected. We didn’t practice until Friday but we aren’t making any excuses at all. We have told the kids from the get go whichever team stays positive and stays together throughout this season will be right there at the end.”