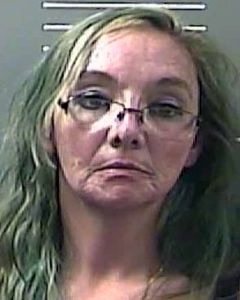 HOPE R. GRISSOM NABBED IN LAWRENCE COUNTY AFTER TRAFFIC STOP LEADS HER TO GETTING CAUGHT ENGAGING IN INTERSTATE TRANSPORTATION  FROM OHIO OF ILLEGAL NARCOTIC STREET DRUGS.

An Ohio woman who was pulled over on a traffic stop this past early weekend for having the wrong license plate on her car, ended up going to jail when a Lawrence County deputy noticed something in her mouth that turned out to be illegal narcotics.

Hope R. Grissom, 43, of Dayton, Ohio, was pulled over on U.S. 23 in Lawrence County just after  early Saturday morning, February 20.

While talking to Hope Grissom, a Lawrence County deputy Everett Chase Kirk noticed she appeared to have something in her cheek, to which deputy Kirk asked Grissom what it was. Hope Grissom answered to deputy Kirk that it was “gummy bears,” but when deputy Kirk looked in her mouth with a flashlight, he spotted three plastic bags that he shortly identified as containing meth and heroin.

Hope Grissom was taken into custody by deputy Kirk, and was charged with four drug related offenses, and also five motor vehicle/driving offenses, which were as the following:

Hope Grissom was transported to and was lodged in the Big Sandy Regional Detention Center in Paintsville, where she remains being held on a $5,025 full cash bond only.