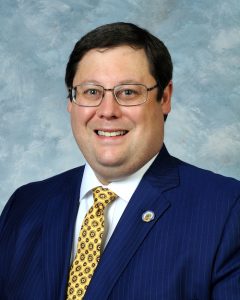 Severe winter weather that blanketed the Commonwealth last week has left thousands without electricity and some even without heat. It is my sincere hope that you and your family remained safe and warm. I stay inspired by our linemen and road workers’ committed efforts as they brave the elements to keep the world turning for all of us. Also deserving credit are local officials who have taken the necessary action to provide a local response amid power outages and, of course, our first responders who remain on duty during rain, sleet, or shine.

Due to the condition of roadways and low temperatures, official legislative work was postponed last week. The safety of staff and members was prioritized. Rather than getting on treacherous roads, meetings were held virtually, and work was done remotely where it could be. No committee meetings were held, nor was there any activity in the House or Senate chambers. The General Assembly is scheduled to reconvene on Monday, February 22, at 4:00 p.m.

Even though the session was postponed, the legislature remains focused on its efforts.  I look forward to returning to Frankfort this week to continue working on your behalf and for our state and the 31st District’s betterment.

A significant development we learned recently relates to the tens of thousands of outstanding Unemployment Insurance (UI) claims that have yet to be resolved due to the incredible burden placed on the UI system over the past year. During such inclement weather, I cannot help but think about the individuals who have struggled to pay their bills and who have not received the UI benefits that would allow them to do so.

Providing for one’s family is not a partisan issue.  A recent report published by Kentucky State Auditor Mike Harmon indicates over 400,000 emails related to UI that have yet to be opened.  Additionally, it appears several payments were backdated, and some folks received benefits for which they did not qualify. The full report lists additional findings. You can view it at auditor.ky.gov.

While this report shows that there is still much work to be done, there are also positive signs on the unemployment front for struggling Kentuckians.  I would like to personally thank the Director of Legislative Affairs for the Kentucky Labor Cabinet, Ms. Morgan Eaves—along with her dedicated team—for the work done on behalf of my constituents in the 31st Senate District. They have also assisted countless other Kentuckians from across the Commonwealth who are having problems receiving their benefits.  They have done a remarkable job providing swift and efficient resolution to many claims that have been outstanding anywhere from several weeks to several months.  At Ms. Eaves’ request, I and former Deputy Labor Secretary—and current State Senator Mike Nemes—filed Senate Bill 126 to transfer the Division of Unemployment Insurance from the Education and Workforce Development Cabinet to the Labor Cabinet so that we can expand on positive developments. The bill would codify into law an executive order from last August that made this change.

I know many people continue to struggle, and severe weather only serves to make life more difficult. Please know that you remain in my prayers. Do not hesitate to reach out to me if I can be of any assistance to you. You can contact my office by calling 502-564-8100 Ext: 714 or by emailing me at Phillip.Wheeler@lrc.ky.gov.

Be sure to follow severe weather safety tips. By visiting kyem.ky.gov, you can find helpful information to prepare for bad weather. I ask that you join me in continued prayer for our local road department workers, linemen, first responders, and everyone who may be struggling right now. I trust that brighter and warmer days are ahead of us. Stay safe. God bless.

Note: Senator Phillip Wheeler (R-Pikeville) represents Kentucky’s 31st State Senate District, including Elliott, Lawrence, Martin, Morgan, and Pike Counties. Senator Wheeler is Vice-Chairman of the Senate Standing Committee on Economic Development, Tourism, and Labor. He also serves as a member of the Senate Standing Committees on Transportation, Natural Resources and Energy, Judiciary, and State and Local Government. Additionally, he is a member of the Capital Planning and Bond Oversight Statutory Committee. For a high-resolution .jpeg of Senator Wheeler, please visit:https://legislature.ky.gov/Legislators%20Full%20Res%20Images/senate131.jpg