NUMEROUS WRECKS REPORTED ALL ACROSS LAWRENCE COUNTY & NEIGHBORING COUNTIES; STATE TRANSPORTATION OFFICIALS GIVE NEVER BEFORE ORDER TO STOP THE TREATMENTS OF THE VAST MAJORITY OF ROADWAYS EXCEPT TO FOR A PATH TO HOSPITALS 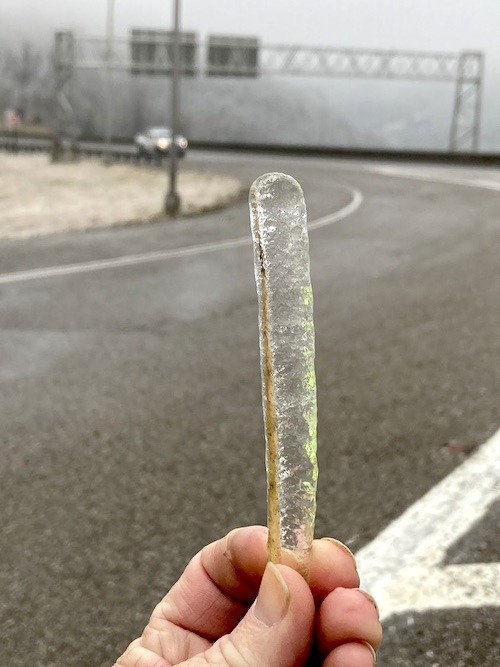 ONE BLADE: WHAT IS WAS AND WHAT IT WILL BE: ONE BLADE OF GRASS PULLED SUNDAY MORNING BY LOCAL RESIDENT KEITH COLEMAN FROM BESIDE A DOWNED LUMINAIRE POLE ON U.S. JENKINS MOUNTAINS IN LETCHER COUNTY, KENTUCKY; WHERE ICE CIRCLES WERE HANGING ON DISTRICT 12 LIGHT POLE HEADS. FOUR POLES WERE DOWN, HIT BY VEHICLES WHICH LOST CONTROL ON THE ICY ROADWAY

Well it looks like that dang groundhog was definitely right about six more weeks of winter.

And it is now turning out to be one of the worst kind of winter we rural folks can get, except maybe short of getting below zero temperature weather.

Lawrence County officials, along with state transportation cabinet leaders, have ordered all roads throughout the county closed, as have other neighboring counties as well, due to severe icing up of roads, which will even get worse with the imminent arrival of approaching ice and snow storm that will be a two prong wave during Monday into Tuesday.

The county order stated that: “All county roads are closed due to black ice and incoming weather. No travel unless extreme emergency. If you have to travel due to extreme emergency please drive slow and use caution roads are very slick.”

Kentucky Transportation Cabinet District 12 officials in Pikeville gave a longer statement, by giving an unprecedented first-time order, in which they gave a warning on the dire road conditions in Lawrence County, and throughout the eastern Kentucky region.

“WARNING: Stay off ALL roads in District 12 the rest of tonight and tomorrow morning. We have reports of roads blocked by multiple vehicles that have lost control and are all over the place. Calls are coming in so fast that it is difficult to keep up with what is happening.

Counties hit the hardest right now (11:30 p.m. Sunday) are Johnson, Martin, Floyd, Knott, and Pike. It is only a matter of time until Lawrence and Letcher have the same issues.

This is not an exaggeration. Officials at District 12 have had to do something we never contemplated: we have told superintendents to pull back from “B” and “C” routes and only work “A” routes, and only do that if they can do so safely.

The rain is freezing before it hits pavement. By the time we work a lane and turn around, it is a sheet of ice again.

Our trucks can’t get there. Our trucks, which have chains and are loaded with salt — which means they are extremely heavy — are having trouble staying on the road.

There are all sorts of dangerous situations right now, and with temperatures falling throughout the night, it is only going to get worse, not better, no matter how much salt and liquid calcium chloride we put out.

When it is so bad that we have to pull back our trucks, no one else should be on the roads. We are trying to keep “A” routes open, the main roads that lead to hospitals. Even that is a challenge in places where the “A” roads have hills.

In Knott County, Superintendent Bobby Smith stopped to help a motorist. He could not stand up when he got out of his truck. The road was a sheet of ice.

Mary Westall-Holbrook, Chief District Engineer, said that D12 employees are experts at driving in all kinds of dangerous conditions. “But I am not going to put the lives of our men at risk when conditions are so dire that they cannot keep their trucks on pavement. When our trucks have to pull back, which has never happened since I’ve been chief, then no one else should even think about trying to get out.”
Internet connections and cell signals are being affected. Power outages are expected. We do not plan to post anything else until early tomorrow morning. This may be the only warning you get from District 12 until tomorrow, so please share it with family, friends, and co-workers.”

Meanwhile, the National Weather Service updated its information on Sunday afternoon, and it showed that tonight Sunday through Monday ice accumulations will INCREASE in Martin, Floyd, Knott, and Pike counties from what was originally forecast.

In addition, rounds of freezing rain, sleet, and snow are expected from tonight (Sunday) into Tuesday morning. More in the way of snow is expected further northwest (Lawrence, Johnson, and Martin counties) and freezing rain is more probable further to the southeast. Any snow will likely be wet and heavy.

Power outages, tree damage, and difficult travel conditions are all possible at times. The Monday morning, Monday evening, and Tuesday morning commutes will likely be impacted. The most widespread and severe impacts are expected from Monday evening into Monday night.

This comes as their are still a significant number of residents in Lawrence County that are still without electric power.

Late Sunday night at 10:00 P.M., a new update of information from the National Weather Service, on the winter storm warning for Monday for Lawrence County was posted as the following:

WINTER STORM WARNING NOW IN EFFECT UNTIL 10 AM EST TUESDAY…

* WHAT…Freezing drizzle overnight. Heavy mixed precipitation Monday into Tuesday morning.
Additional snow accumulations of up to two inches and ice accumulations of two tenths to four
tenths of an inch.

* IMPACTS…Power outages and tree damage are likely due to the ice. Travel could be nearly
impossible. The hazardous conditions could impact the morning or evening commute.

If you must travel, keep an extra flashlight, food, and water in your vehicle in case of an
emergency.’

As if all of this were not bad enough, weather forecasters are now saying that another major
snow/ice storm is likely Wednesday night into Thursday, ending in a dry but very cold Friday and
going down to around 10 degrees.