Week is short on days but long on action 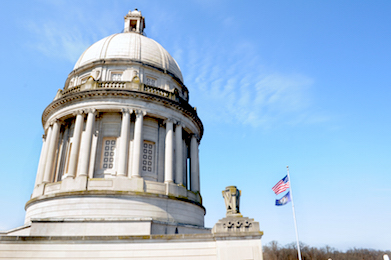 FRANKFORT — With the Senate and House convening three days, it was a week short on workdays but long on action.

The mid-point of the Kentucky General Assembly’s 2021 session is fast approaching. Committee agendas are growing longer and an increasing number of bills are arriving in the legislative chambers for consideration.

This week’s legislative action culminated in one of the longest debates seen in a legislative chamber this year when House members wrangled over the merits of historical horse racing. The Senate also spent considerable time debating the matter earlier in the week.

The issue became a priority for some after the Kentucky Supreme Court’s September ruling that certain historical horse racing games, which many say resemble casino slots, are unlawful. Since then, supporters of these gaming machines have called upon the General Assembly to ensure that they can be played at Kentucky horse tracks, as they have been at some tracks for much of the past ten years. The resulting legislation, Senate Bill 120, would define pari-mutuel wagering in state law in a manner intended to ensure that the games are legal.

Supporters of the measure tout historical horse racing’s benefits to the horse industry (money generated by games pumps up racing purses) and the jobs and tax revenue that depend on the games. Opponents argue that the gambling is predatory and unconstitutional.

The divergent views were reflected in the margins by which the legislation passed the chambers this week. The measure passed the Senate on a 22-15 vote on Tuesday and the House approved the measure 55-38 on Thursday. The bill now goes to the desk of Gov. Andy Beshear, who has indicated support for the measure.

While the historical horse racing legislation was a reaction to a court ruling, other bills are measures that have been re-introduced this year after stalling during last year’s session. The disruption caused by the COVID-19 pandemic led to fewer bills than usual being passed into law in 2020.

House Bill 91 is heading to the full House for consideration after being approved on Thursday by the House Elections, Constitutional Amendments and Intergovernmental Affairs Committee. If approved by both the House and Senate, Kentucky voters would decide on the proposed constitutional amendment in 2022.

Other bills that took steps forward over the past week include the following:

House Bill 273 would amend the Open Records Act to exclude photographs and videos that depict a person’s death, killing, rape or sexual assault. The legislation was approved Tuesday by the House on a 93-1 vote and has been delivered to the Senate for consideration.

Senate Bill 80 would strengthen the police decertification process by expanding the number of acts considered professional wrongdoing. Such acts would include unjustified use of excessive or deadly force and engaging in a sexual relationship with a victim. The bill also would require an officer to intervene when another officer is engaging in the use of unlawful and unjustified excessive or deadly force. It would also set up a system for an officer’s automatic decertification under certain circumstances and would prevent an officer from avoiding decertification by resigning before an internal investigation is complete. Senate Bill 80 passed the Senate on a 28-0 vote and will be delivered to the House.

House Bill 75 would prohibit certain insurance coverage determinations based upon the status of an individual as a living organ donor. It would also encourage the Cabinet for Health and Family Services to develop educational materials relating to living organ donation. The bill passed the House Banking and Insurance Committee on Wednesday and now awaits action by the full House.

Senate Bill 74 would rename the Office on Alzheimer’s Disease and Related Disorders to the Office of Dementia Services and would elevate dementia-related services within the Cabinet for Health and Family Services. It would also establish a Dementia Services Coordinator to help improve treatment and diagnoses of dementia in Kentucky. The Senate passed the bill on a 36-0 on Tuesday and sent the legislation to the House for consideration.

In addition to considering more bills next week, lawmakers will take part in the 2021 Black History Celebration. The event is usually held in the Capitol Rotunda, but due to the COVID-19 pandemic, this year’s celebration will be held virtually. Hosted by the Kentucky Legislative Black Caucus, the event will be available for online viewing starting at 11:30 a.m. on Feb. 16 at http://bit.ly/BHC-2021

The theme for this year’s event is “The Struggle Continues: Pandemics, Social Justice, Equity and COVID-19.”