GROWING UP IN LOUISA: Valentine

I’m sure that everyone remembers those very early experiences dealing with winter’s Valentine’s Day. It was about little red or pink heart-shaped candies with proclamations printed on them. I used to try and collect as many different ‘sayings’ as I could. They really didn’t have a chance because I’d soon enough have a mouthful of sweets. The only thing better were the Russell Stover or Whitman chocolates that found their way into our home. 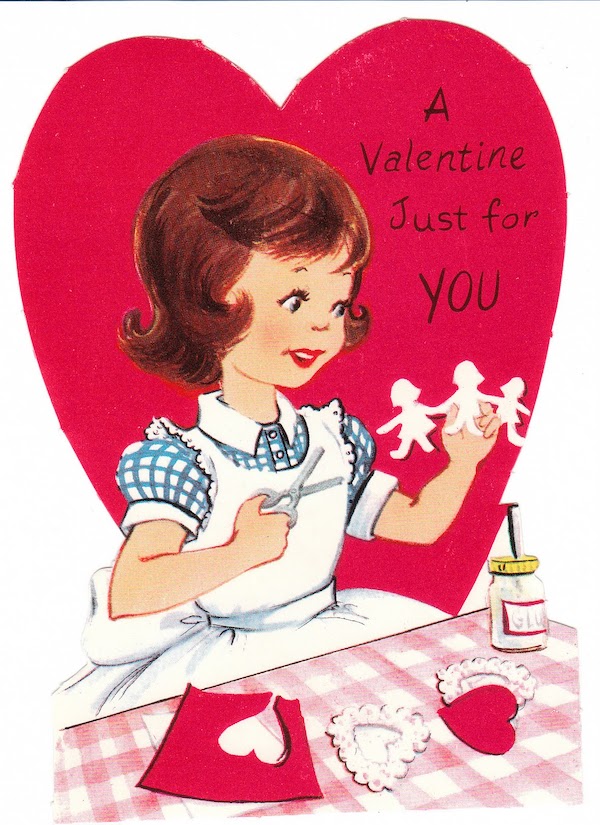 Valentine’s Day was a sweet distraction considering it came during one of the coldest times of the year. It was tough for a kid to be closed in for all those gloomy days. How nice to sit with craft supplies and design a special card for mom. Of course we had to make a bunch for the kids in our class, but after all, it was mom that was our real valentine. We learned to make some fancy cards in our grade school class. We’d get glue everywhere, including our hair, but when spreading the white Elmer’s stuff (or Borden’s, maybe?) close was ‘good enough’ for this kid. I remember the cutout lace I wanted to stick to the borders of the card, but I had run out of glue. Now, where did that go?

After putting together some masterpieces we would place them into a homemade mailbox made for that special, dreamy person that we were too afraid to approach otherwise. Of course, not everyone was shy, but I certainly was. In the first grade, I remember that a part of me was afraid no one would like my cards, or that I wouldn’t get any from anyone else. This season was set to become traumatic and feed for complexes yet to be named. I remember that I had distress over any kind of social interaction with those pretty, little angelic girls. Yes, I feared them, but at the same time my young heart pitter-pattered anytime one of those creatures spoke to me. Understandably, I was afraid of their expression when they saw a card was from me. I would carry the pain for years, thinking I didn’t measure up.

I suspect other kids also feared not getting a Valentine, like ‘Charley Brown’s,’ issue with the little red-haired girl. Then there was the risk of not getting as many cards as someone else. I wanted to stay home and hide under my bed, but my parents wisely sent me packing off to school anyway. I had to face the music and deal with life’s stresses. Once at school I had but to withdraw into the shadows of the classroom, or work my way into the medley of a crowd of noisy kids. That gave me a level of protection and kept me from ‘losing face,’ an idea the Asian folk understand better than us.

On the other hand, another part of me enjoyed the free expression when actually creating the cards. Whether by cutting out different colors of paper and pasting them together in a truly unique way, or pin-pricking designs around a large central heart, or by cutting out a lacy fringe around the central message, the prize at the end was a creation that would prove to be worth the effort. I remember drawing images of little winged cupids with their bows and arrows drawn to hit unsuspecting kids. I glued little hearts that floated around the margins of those cards and wrote a poem that declared my adoration for the recipient. It would have been easy to not sign the card but where is the bravery in that? 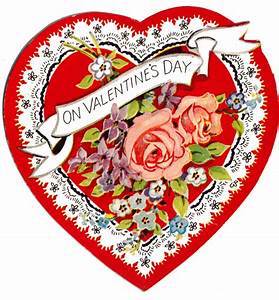 After all, Valentine’s Day is all about love. I knew very little about the different kinds of love in those days. Romantic love was the stuff of Disney movies, cartoons, and the fairy tales that were read to us in those days. I understood family love and the personal attachment developed with real friends, pets, or ideals of God and country. Most of the time the mushy stuff was brushed aside by us boys. Well, maybe that was a façade, too. I really didn’t mind when in the movies, cowboys would look dreamingly into the cowgirl’s eyes and venture a smooch as an award for beating up the bad guys. Westerns often ended with a kiss and a ride into the sunset. Yuck! While some boys openly rejected this model, it was also obvious that the girls didn’t. They swooned and melted and retracted into their own private dream world. Hmmmm. I kind of understood that and expected the same but I was not quite ready just yet.

Early messages on the Valentines were ‘Will you be my Valentine?’ and ‘From your Secret Valentine.’ Today, it is more about a message of love to that someone special. In the classroom our teachers practiced an early form of ‘political correctness’ by having everyone in the class give everyone a Valentine. That broke up the social pressure, but it may have also cheapened the message meant to be shared with that special one that we were keen to love with an everlasting love. Ahhhhh! Like a Hallmark movie moment, I finally came to find what was meant. Life has been sweet ever since.

Leave it to the merchants and inventors to take advantage of love. It was American ingenuity that turned them to see the income possibilities from yet another holiday. Hersey, Whitman, Stover, J.C. Penny and others figured out that if they marketed to consumers that wanted to honor a loved one, or a potential sweetheart, they could make big bucks. Who knows? Maybe those gifts did the trick while providing the ‘food-chain’ of suppliers a higher standard of living. It was a long dry spell between Christmas and Easter for the candy makers. Valentine’s Day was a near perfect solution. The companies that made cards had long-ago cut and stamped out packages of Valentines to buy, sign and send. In fact, the old ones are collectables now. I saw one in a museum once from late 1800’s. 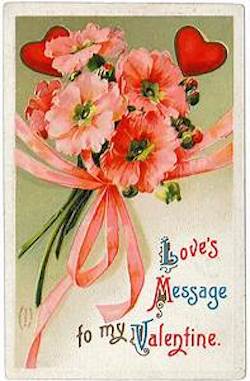 So, as children, we grew older, wiser, and maybe a little more affluent. We purchased and gave chocolates to those we were enamored with as a token of our admiration. It was becoming a little like Easter without all the baskets. Couples going steady were sure to get a nice present of candy or flowers. Some really lucky damsels got a ring with a promise of undying love. Images of white wedding dresses and an exotic honeymoon appeared in the minds of the brides-to-be. Both lovers thought about that cute little house with a picket fence and maybe a dog that may be in their future. Maybe someday they’d have a bunch of kids to teach how to play ball. It’s the American way, you know.

More and more the retailers decided not to miss the chance to promote Valentine’s gold, silver, and diamonds. In the case of department stores, there was special red, or black-laced lingerie, displayed on ‘end caps,’ with signs encouraging men to buy their sweetheart an intimate gift. I was advised by an adult in my family that those were ‘off limits’ for me to buy.

When it comes to this special day, a wise husband makes time for his wife, and a wise wife does the same for her husband. I used to have a weekly date with my honey, usually taking her out for dinner. Now, since retirement, I have a date most every night. We block off the evenings to watch mysteries, or talk, or pray over our kids and grandkids. We still try to get out on those events that mark yet another year. The evening date time is special for us and when it is interrupted, we resent it to a degree. Oh, we enjoy seeing the kids if they drop by, but we enjoy each other, too. I asked Suzy a week ago what I was getting her for Valentine’s Day. She knows how I feel, except for now it’s driven more by the feelings of the heart than hormones. Thank goodness! It’s now about two older folks sitting next to each other, holding hands, and bonding.

As I grow older I look back and remember those long-past grade school feelings, but frankly I can’t remember who I got a card from or who I gave a card. I do remember the dread I had over the potential reaction. What a relief it was when it turned out well! In the first few grades of elementary school we didn’t spend a lot of time ‘liking’ someone. That would come later. Some of the girls would draw hearts on their book covers, or have two sets of initials with a plus (+) sign between them. You’d also see those written in chalk on sidewalks. I admit we did appreciate when we saw someone that was cute, handsome, or pretty. We’d huddle and whisper, but not dare let it leak out we ‘liked’ someone. I suspect nearly everyone carried a flame for someone but dared never to let it out.

As a young boy I saw Valentine’s Day as a time when society demanded we take a day to do ‘girly,’ or ‘mushy’ things. It became more our idea when we were in high school, but that was after the hormones had done their job. We finally discovered that sharing feelings is a good thing and has its rewards.

If you can, remember that special someone and let them know that you care. May you have an enjoyable Valentine’s Day with someone you love.