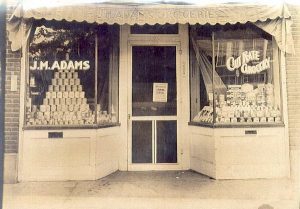 hen I was little it was my dream was to run through grand piles of candies, barefoot of course, throwing those goodies into the air behind me. I imagined scooping them up into bags, pockets, and sacks of brown paper to take home to eat later. I can barely remember Adam’s Grocery on the corner of Clay Street and Madison, but I know as soon as you entered into that wonderland, there was candy, gum, and other sweet morsels awaiting the weary traveler. It was Candy-Land!

I remember hard jaw-breakers that filled my cheeks and told anyone who saw me that taste take over the inside of my mouth. When I was on this mission I could not worry about others things lest the round ball totally melt leaving a void of sweetness my tongue explored until a dull ‘normal’ returned in my life. 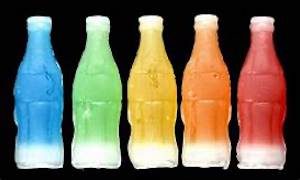 Then there was the little waxed section that had secrets of its own awaiting discovery. The little wax coke bottles were filled with a sticky syrup that exploded when I bit down on the neck exposing the liquid to run out and down my face, covering the fresh shirt mom had only just given me that morning. I had to hurry lest I be covered with stickiness. I knew from experience that once exposed to the outside all kinds of lint and dirt would stick to it and tell the story of my activities. There were also some big, waxed lips that a kid could hold over their own, but like all things good they would not last long. The piece meant to hold them in place was the first to go, but finally I chewed all the sweetness and spit out a ball that was spent of its value. 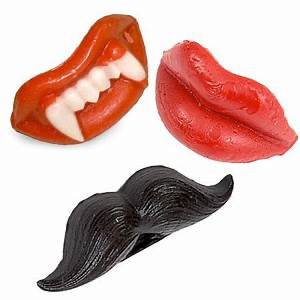 The trustful grocer was kind enough to carry many different kinds of gum. He carried a little square of wrapped gum that came with a little comic in color. We read those with delight and laughter. The product was good too, and lasted into the day. If funding was limited this was a good choice, usually a penney a piece.  The wad was larger than the Chicklets I would get out of a machine at the train depot, or from a dispenser at the Rexall Drug store downtown.

Wrigley’s produced spearmint gum up until WWII, and then introduced a new product called Orbit. This one allowed Wrigley to give their regular gum to those soldiers and sailors involved in the war effort. Of course, part of the reason was that there was a limited supply of raw materials during the war, and Mr. Wrigley did not want to change his recipe. After the war he again produced the spearmint gum, Juicy Fruit, and added ‘Double-mint’ to the mix. I remember the commercials of the day featured twins, to sell the idea of “Double the Flavor, Double the fun, it’s Double-mint, Double-mint gum.”

I always thought the main difference in chewing gum and bubble-gum was the elasticity of the chewed product that allowed one to take one’s tongue to blow the substance into a balloon that would soon enough burst and coat my face. I was never able to get chewing gum to work in that way, but never gave 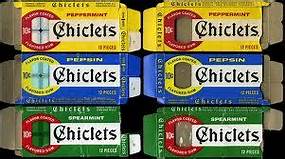 up trying. The neat thing about blowing bubbles was all the fun of dealing with the after results. First of all, we tended to gobble up more than one piece, which made for a problem getting rid of the well-chewed wad, later. But first, let’s look at the times we had a really big wad of bubble gum. We’d chew and work it until finally it was all broken down, soft as bread dough, and then we’d start stretching it by pushing out our tongue against it while we tried to hold it safely between our teeth. More than one kid would blow it out of their mouths sending it halfway across the room, usually avoiding hitting others, but pretty much ruining the gum. Once on the ground it tended to attract dirt, sand, pine needles, leaves and if you were really unlucky, a bug.

It was time for another try with some fresh gum. Finally, after working the wad for an eternity we were able to start a bubble. It was reasonable that if one or two pieces made a nice bubble, then several pieces would make a ‘big’ bubble. Those were the ‘more is better’ days. Alas, every successful bubble has its day. 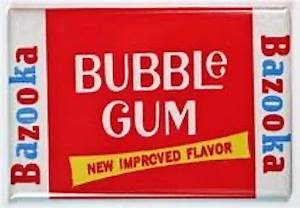 That’s right. It would burst. In the deflating process, a used bubble created a rubbery mask for the host. Gum would cover the face. At first this was a nuisance, but we soon learned to accept this, and become skilled at retracting the gum with a flick of our tongues.  Some weren’t so skilled. I remember a kid who got the huge bubble mask all over their face, hair and eye glasses. It took some time to clean up the mess and the gum was well contaminated and had to be retired.

Then, there was the kid that stretched the gum out in a thin string and folded it back on itself, as if it were a yoyo string. Talented kids could have multiple strings going and make interesting designs looking like bow ties. This practice led to sticky fingers. Sticky fingers attract dirt. Nuff said. Now, that puts one back to the problem of how to rid ourselves of the unwanted bundle. Keeping the used wrappers, some of us had the solution right in our pockets. Others? Well, maybe not. They’d simply remember where they spit it out and stay away from there for a suitable time. The rest of the population needed to be aware. The larger wads could be put into a sling shot and sent in a suitable direction, or placed carefully under mom’s favorite coffee table for a potential revisit should supplies dwindle.

For gum users that had rotted their teeth out, a new product was introduced that would allow for continuation of the habit. Trident, or any of those with ‘dent’ in the word was a clue that it wouldn’t stick to dentures. Anyone having a partial or full denture understood that chewing gum was not so designed and could lead to a form of ‘lock-jaw.’  After all, it is so embarrassing to take your teeth out and clean them with a stick. Cleaning shoes is easier. I remember ‘Clove,’ ‘Beeman’s,’  ‘Black Jack,’ ‘Double-Bubble,’ ‘Beech-nut’ and the others previously mentioned. The king of gums has to be the Wrigley bunch in Chicago. I know from their website that they are generous in support of a number of programs through their foundation. This includes a program to teach and help with oral hygiene. 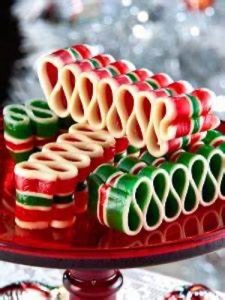 There were also bins of hard candy that kids loved to hold in their mouths to melt while holding a bag of more types including peppermint, a Christmas favorite. Behind the slanted glass case I remember seeing jars of chocolates and caramels including ‘Bit O’ Honey.’ If you chomped down on one those it would threaten to glue your jaws together. If a kid had a tooth filling, this was enemy number one, but it tasted so good! The trick was to enjoy them carefully.

For kids who could manage a nickel there were candy bars. Hersey milk chocolate bars, sometime with almonds were the beginning of this higher class of confections. Later came Zagnut, Mr. Goodbar, Clark bars, and others. There were boxes of Moon Pies made of flat crackers with marshmallows and covered in chocolate. I remember as a teen I would have a RC Cola and Moon Pies. I would sometimes put salted peanuts in a Coke and enjoy the mixture of flavors.

Grocery stores and filling stations all carried some of these wonderful treats, but they also had machines that held and dispensed ‘pop.’ Some of these cooled the drinks down in cold water thusly called ‘coolers,’ while others, at least later on, refrigerated the drinks to drop down a shute to those with a dime, or even a quarter.

It is likely that while I’ve named some confections the reader knows and has strong memories of, it is equally possible I have overlooked, or forgotten some of your favorites. Rock candy was an early kind, the fancy truffles that came in Whitman Samplers, and the special Christmas Cream Candy I’ve written about before. Even so, fancy or not, I remember the wonder of standing with my nose against the glass at the many grocery stores that were on many of the corners around our little town. Candy was the thing that built memories that gave us hope of another day, and the sweetness of life. Seeing those places gave us a concept of what ‘Sugar Plum Fairies’ may be like.

Candy sections of the stores were for kids, but I’ve seen many a grown up kid buying a bag of this or that. They might claim it was for the children at home, but I wonder how much of the treat made the trip. Department stores had their toy sections but the grocer had the stuff to catch my attention every day of the week.

We are a couple of weeks out from Valentine’s Day, so you have time to visit your favorite distributor of joy, but remember, the trip is for those you love. . . or maybe, to bring back a memory of another time.

LAWRENCE COUNTIANS: You can now pre-register for covid vaccine if you are 60 or older!