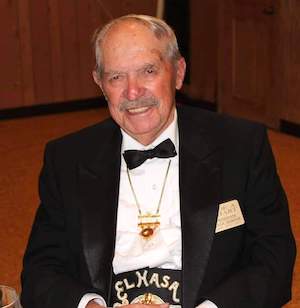 He was born January 07, 1931, in Zelda, Kentucky to the late John T. and Mary Davis Hart. He and his family attended Buchanan United Methodist Church.

He served the US Navy as a veteran on behalf of his country.  He graduated from Louisa High School and was a talented football player for his successful team.  He had the nickname as ‘Dreadnaught’.  He completed management courses and received training to pursue his management career with Ashland Oil, Inc.  He was retired and was a former Purchasing Coordinator and Storeroom Manager of Ashland Oil Refinery Plants No. 1 and 2 in Ashland, Kentucky.  He was an active farmer and was involved with community affairs.

Joe was very active in many fraternal organizations in the community receiving numerous honors through his significant contributions.  He was active with the Masonic fraternity by being raised to the sublime degree of a Master Mason with Apperson Lodge #195 in Louisa on May 1959 and served the lodge as Master in 1963.  His Masonic degrees and dates are listed as the Entered Apprentice on September 13, 1958, passed to Fellowcraft degree on March 14, 1959 and raised to a Master Mason on May 23, 1959. He previously served Apperson Lodge as the Treasurer for many years. He has over 60 years of service to the Masonic fraternity.  He has served the Grand Lodge of Kentucky in the past on several committees and was distinguished to serve as Grand Senior Deacon of the Grand Lodge of Kentucky, F. & A.M.in the year 2005-06 with his son serving as Grand Master for the state of Kentucky.

He has provided service and leadership within the family of Freemasonry by his involvement and contributions in Scottish Rite, York Rite, Order of the Eastern Star, the Shrine and the Order of DeMolay. He was active with Scottish Rite Bodies in being a member of Indra Consistory, Valley of Covington and was recognized as a 32 Degree KCCH.  He was active with the Royal Order of Scotland, involved with Louisa Chapter #95, Royal Arch Masons as Past High Priest and was current Treasurer, Everett Council #65 Royal and Select Masons, and Ashland Commandery #28 Knight Templar.  He was active as a member and officer with the Order of Eastern Star at Louise Chapter #292, Louisa, KY in serving the chapter as a Past Patron.

Joe was active as a Shrine Mason for over 50 years of service.  He served El Hasa Shrine in Ashland with outstanding service as a Trustee, Past Potentate for the year 1979 and Treasurer for over 17 years.  He was recognized and awarded Treasurer Emeritus of El Hasa Shrine.  He was active in many units and clubs of El Hasa Shrine.  He was a Past Director of the Big Sandy Court #173, Royal Order of Jesters.  He was an Advisory Council member of Owen R. Meadors Chapter, Order of DeMolay for our Masonic youth.  He was an Honorary Member of the International Supreme Council, Order of DeMolay having been honored as an Honorary DeMolay Legion of Honor.

Brother Hart is survived by his son Patton Hart of Louisa and a niece Elizabeth. He was preceded in death by his parents, his wife Ruby Patton Hart in June 2018, sister Mildred Irene and brother Ray and sister in law Cecilia.

Funeral service will be conducted on Thursday, January 28, 2021 at 2:00 PM in the Young Funeral Home Chapel with Brother Keith Workman and Pastor Dan Smith officiating. Burial will follow in the Buchanan Chapel Cemetery with full military honors.

Joe will be sadly missed by his family and friends.  The family requests that anyone attending services please wear a mask out of respect for our friends and family who may have compromised immune systems. In lieu of flowers, please consider a memorial donation in Joe’s honor to Shriner’s Hospital for Children, 110 Conn Terrace, Lexington, KY 40508 or to Buchanan Chapel United Methodist Church.