GROWING UP IN LOUISA: Comforts of Home

We all know that in life things happen. Some are good, but a few are less so. I dare say that many things happen around us almost outside of our notice. We are the recipients of positive changes, but these are taken for granted. While it is true enough that some changes are ornery and ‘cramp our style.’ Most things have been beneficial. Let’ look back to another time so see how really blessed we are.

I was watching a pictorial documentary the other day when I was taken on a virtual tour of a 1940’s era kitchen. Wow! This was not at all something our children could comprehend, but the memories of yesterday simply rushed forward in my mind. As it happened, the tour took me to a number of kitchens, all of which looked very like the ones I visited in homes when I was growing up.

My memory tells me that kitchens often had only a few pieces of furniture. They had a plain kitchen cabinet with glass in the upper doors, and vintage knobs to pull open the drawers and doors below. While most were painted white, I remember a few that had decals, usually a sticker of some flowers, but some were other colors such as a pastel green or yellow. A few kitchens had ‘Hoosier’ cabinets complete with a flour bin and a pull-out working surface suitable for mixing biscuits or attaching a meat grinder. Over tightening resulted with chipped enamel, sometimes in several places along the lip of the surface. While these came in natural wood they also were frequently white. These had places for keeping spices, flatware, pots/pans and cookie sheets. Many of these had a flour bin and a sifter, too. We have Suzie’s great grandmother’s sitting in our kitchen today and love it. 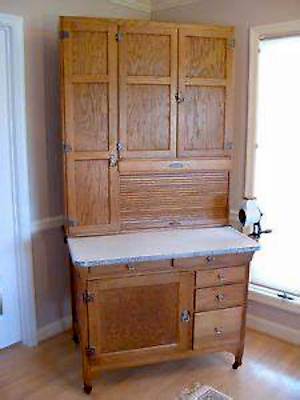 For lucky ones there was a sink and some shelving that was called a pantry. Those that were ‘better to do’ may have had another room off the kitchen that housed the ice box, or a rounded top refrigerator that had a small square freezer. We had a gas range in the kitchen with an oven and a broiler. We used the broiler to toast our bread on one side so we could make cinnamon toast. We had a small table that I used when I listened to my favorite radio shows and sing-along programs. I ate breakfast there, as well as many other meals. Only occasionally were meals served in the dining room.

Those kitchens did not have counters or cabinets. Shelving was used to make a pantry. They sometimes had a curtain, but most did not. All the wares were there for everyone to see. While the floors were wood, they were covered with linoleum that had a printed pattern of some kind. I remember ours was so worn that the bare wood could be seen in the more heavy trafficked areas. There was no fancy plumbing, either. We had two faucets, one for hot and one for cold. Below that was a deep tub meant for washing dishes. I remember some that actually had a water pump over a galvanized tub. Bathwater was drawn from this pump and heated for Saturday nights.

A lot of good food came out of that old kitchen, including wonderful pastries, meatloaf, fried chicken, and sweets. I loved it when mom stood at the stove frying chicken in Crisco and making sure the crispness was perfect. It always was.

It was just after WWII when factories turned their attention from war production to taking the lessons learned and marketing new products. Electricity was the element driving changes we never imagined. Small things like appliances made life better and forced us to think differently. Waffle irons were one of my favorites. Electric mixers to replace the old wooden spoons for mixing batter was another. As the number of these new electronic tools appeared we found we had to upgrade our electric power, lest we blow another fuse. As a young child I learned to unscrew the old fuse and install a new one of the correct amperage. It’s a wonder I didn’t fry myself by touching the wrong things.

When turning my thoughts back to those kitchens of old, I am amazed at how our standards of living has changed. That trip back to our childhood reflected some differences we don’t even consider. Back then no one had double ovens, granite counter tops, multiple sinks, refrigerator/freezer with ice dispensers, a microwave, tile floors, a grand hood with lights/fans over the stove-top, a disposal, a trash compactor, air fryers, and even sources of heat and air conditioning. Things are good for us today, but we too often don’t see how very blessed we are. 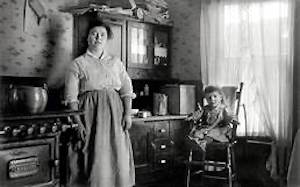 Kitchens were and still are mixing places where parents, kids, friends, and extended family all gather.  Thinking back I don’t see how we did it back then. We lacked the tools, the space and even the wide selection of ingredients that are so available to us now. Back then we did it the old way, from scratch not out of choice, but because we didn’t have premixed stuff from out of a box. We had to follow recipes. Back then part of the job was watching the bread rise, or beating the cake batter with a large spoon one-hundred times. Fresh vegetables out of the garden or from a local farm fed us and kept us happy. We all helped where we could and learned in the process. I’m sure that’s at least part of why I love to cook and enjoy other’s good cooking. Somehow the processed foods, thought tasty enough, don’t really make the grade.

There’s more to kitchens that bring back sweet memories. Baking our first tray of cookies, smelling the roasting hen, or looking forward to icing another birthday cake added excitement and taught us a thing or two. Overall, it was the gathering of people, the laughter, and the love that mattered. We didn’t feel lacking or poor. Life was life as we found it. We made do and had fun doing it. Oh, it’s certainly nice to have a modern home, but it is really more about having family and friends over, fixing the vittles, and enjoying today’s blessing that we don’t deserve.