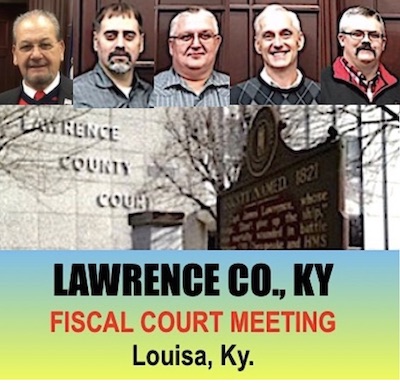 In Tuesday’s ‘Zoom’ Lawrence County Fiscal Court voted to accept Blaine Fire Department’s intent to re-apply for a CDBG Grant for their new fire station. The project has been previously approved but never completed last year. Much speculation has been made as to the funding and placement of the modern new facility.

Court members voted ‘aye’ on all agenda items during the online meeting attended by magistrates John Scaggs, Mike Halcomb, David Pinson, and Rick Blackburn and Judge/Executive Phillip Carter as well as invited members of the media and the public online.

In other Zoom action the court:

Deputy Judge Doty also announced that in the first two years of this administration Lawrence County has received over five million dollars in solicited funds.

“That means funds which had to be sought after and applied for such as grants, road funds and projects as well as FEMA work to name a few, Doty said. “These are mainly funds which have to be completed then request reimbursement for.”