Jan 18th, 2021 After ramping up for a major protests at the state Capitol Sunday, few protestors showed up and they were peaceful. 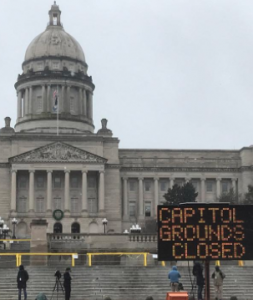 The FBI sent warnings to all states to be prepared for protests at every Capitol.

The National Guard was called to Frankfort in addition to Kentucky State Police and Frankfort police.

A few people wandered in — some with rifles and handguns — but the mass protest did not materialize.

Similar scenes played out around the country.

Meantime, AP is reporting that a Kentucky man has been arrested on multiple charges related to the storming of the U.S. Capital last week.

Chad Barrett Jones of Mount Washington was arrested Saturday in Louisville, the U.S. Justice Department said. He was charged with assault on a federal officer, civil disorder, obstruction of justice, unlawful entry, violent entry, disorderly conduct and destruction of government property over $1,000.

The FBI apparently received a public tip identifying Jones through images taken from video of a man attempting to break the glass on an interior door at the U.S. Capitol was Jones. He was wearing a red hooded jacket and gray sock cap and struck the door’s glass panels with a long, wooden flagpole.

A second witness corroborated the first witness statement that Jones was trying to break the glass window, the affidavit said.