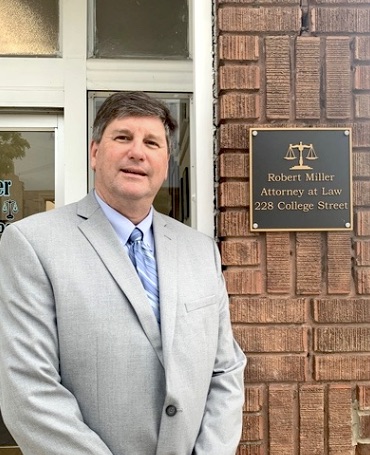 He is also survived by his wife of 31 years, Kimberly Price Miller whom he married on December 16, 1989. To this union were born two sons, Taylor Robert Miller of Louisville, Kentucky and Tanner O’Neil Miller of Lexington, Kentucky.

In addition, he is survived by his mother-in-law, Bonnie Price of Oil Springs; two sisters-in-law, Sheila Wells (Eddie Back) of Oil Springs and Bonnie Houf (Robert) of Georgetown, KY; one niece, three nephews, and two great nieces.

Robert received his BA in Political Science in 1989 and his JD from Chase College of Law in 1992. He was a member of the Kentucky Bar Association (October 1992); US District Court, Eastern District of Kentucky; Sixth Circuit Court of Appeals; Fourth Circuit Court of Appeals; US Supreme Court and the Chase Alumni Association.  He practiced law in Paintsville for 29 years and was licensed to practice law in Kentucky and West Virginia. He was a member of Paintsville First United Methodist Church and on the Board of Trustees.

There will be a Private Funeral and Burial for the immediate family.

A time of reflection with family and friends will be held Friday from 11:00 a.m. until 1:00 p.m. at Jones-Preston Funeral Home.

In lieu of flowers, memorial donations are requested to First United Methodist Church by contacting:

Jones-Preston Funeral Home is both Honored and Privileged to be Entrusted with all funeral arrangements for Mr. Robert G. Miller, Jr.