The Kentucky General Assembly spent the last day of the first part of the 2021 session working on the state budget and sent one bill to the governor.

There were four budget bills under consideration, for the Executive Branch, Transportation Cabinet, Legislative Branch and Judicial Branch.

All four were passed as continuation budgets of the current fiscal year. The Senate did make minor changes in each, which required concurrence by the House. They would not agree, and the Senate would not recede from their changes, so conference committees were named to begin the real work on crafting a budget for the fiscal year starting July 1. 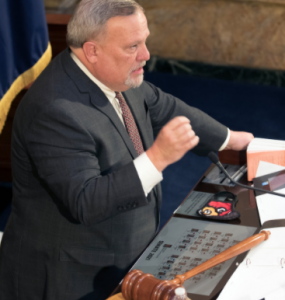 This marked a change from previous years, where the House would spend a month or more to craft a complete budget, the Senate would then come up with their own version, the House would not agree to the changes made by the Senate, and conference committees would then be named. This way, they were able to get the budget bills into the conference committees after just eight legislative days, instead of waiting for the waning days of the session.

A fifth budget bill, which deals with COVID-19 related funding for state agencies, eligible small businesses, non-profits and others, was pulled by Rep. Jason Petrie, R-Elkton, after he became aware of problems in the bill that needed to be addressed. It won’t be taken up until lawmakers return next month.

A measure that did win final approval Wednesday, would end the current practice of having all civil cases involving state agencies and Constitutional issues, be heard in Franklin Circuit Court.

While the bill was first proposed in the House, it included provisions for selecting a panel of three judges from around the state to hear the cases, and that was the version sent to the Senate. However, the Senate changed that to allow cases to be heard in the county where the dispute originated.

Unlike the budget bills, the House agreed to that change, and that’s the version that is being sent to the Governor.

Both chambers have now adjourned until Feb. 2, for the last 22 days of the 2021 regular session, which under the Constitution must conclude by the end of March.

Since lawmakers met during the first part of the session for eight days instead of the four provided for in the original session schedule, those four days will have to be removed at some point. A revised schedule has not yet been finalized.

Lady Bulldogs bounce back after first loss of the year