FORMER SCOTT COUNTY, KENTUCKY SUBSTITUTE TEACHER ARRESTED AND CHARGED WITH RAPE FOR HAVING SEX WITH MINOR 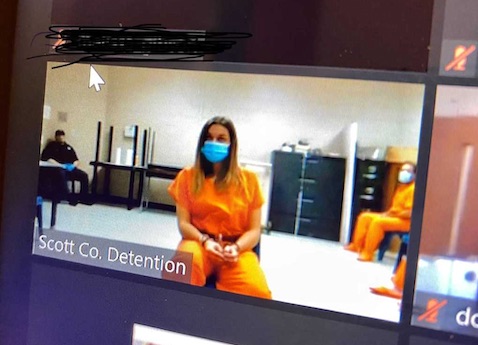 ALEXANDRIA MAE ALLEN, 25, OF GEORGETOWN, KY., ARRESTED FOR SEXUAL RELATIONSHIP WITH HER EIGHTH GRADE STUDENT AS SHE WAS HIS TUTOR.

A former middle school substitute teacher at Royal Spring Middle School in Deoregtown, Ky., in Scott County, has been arrested and charged with three counts of third-degree rape.

According to the arrest warrant, Alexandria Allen came into contact with the 15-year-old boy when she was in a position of authority or a position of public special trust, as she was tutoring the boy. Police say in a forensic interview, the teen told them he had sex with his 25-year-old teacher.

At the time, the mother told in an interview with Lexington, Ky. television station WLEX, “I was disgusted because you’re supposed to be helping him, and she wasn’t helping him at all.”

WLEX did not identify the mother to protect her teen son’s identity.

The arrest warrant reported that the alleged rapes happened from March to October 2020, at three different locations, including the Hilton Inn in Georgetown.

During court, Tuesday, January 5, Alexandria Allen’s attorney entered a not guilty plea on her behalf and waived formal arraignment. The judge who was presiding the hearing reduced her bond to $2,500 and ordered no contact with the victim, due to Alexandria Allen having no prior criminal record.

Alexandria Allen is due back in court for a preliminary hearing on February 2nd.

Georgetown Assistant Police Chief Darrin Allgood said that they are still reviewing other evidence along with waiting on search warrants so that they can get access to several other social media accounts, and additional charges could be filed.

ANTHONY HARNESS, 53, OF LANCASTER, KY, WHO IS FACING CHARGES IN TWO COUNTIES.

Kentucky State Police arrested Anthony Harness, 53, of Lancaster, Ky., after they say he admitted to having sex with two male minors several years ago in Lincoln County.

Authorities say the victims are now adults but were 14 and 17 years old at the time of the alleged abuse.

“One of the gentlemen that came to us said that it had bothered him for some time, said Lancaster City Police Major Ryan Hughes. “He was dealing with a lot of personal issues and was talking to a friend about it and learned the same friend had had similar issues that happened. He didn’t want this to happen to other people.”

Anthony Harness is also facing the same charges in Garrard County. According to both of the arrest citations, both police agencies stated Anthony Harness admitted to having sex with the minors.

According to the arrest citation by Lancaster Police, Anthony Harness admitted to telling the teens he was a deputy sheriff with the Lincoln County Sheriff’s Office, when in fact, he was not.

“When his vehicle was impounded on the day of his arrest there were blue lights in it, handcuffs things of that nature,” said Hughes.

In his court appearances, Anthony Harness had his not guilty pleas entered on his behalf of his attorney. The director of Lincoln County Emergency Services says Anthony Harness has been an EMT for well over 20 years.

Anthony Harness was transported to and lodged in the Lincoln County Regional Jail in Stanton, where he is being held on a $400,000 full cash bond only.