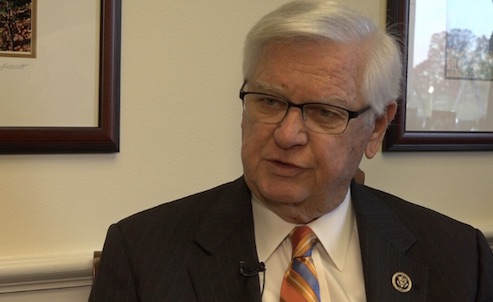 Congressman Rogers, who represents Kentucky’s 5th District, which covers most of Eastern and Southern Kentucky, released his own statement early Thursday morning.

It states, in part, “I received hundreds of calls and emails from people across Southern and Eastern Kentucky questioning the integrity of the presidential election in other states. Every American should have confidence in knowing that every fair vote is accurately counted.”

The Democrat response to Rogers’ vote reads like this:

We have reached out to Congressman Rogers’ office to see if they wish to respond directly to the KDP statement. Here is the press release issued by Rogers’ office:

“…The electoral process in America has been one of most defining attributes of this great nation, evolving over time to ensure the voice of every person is heard, regardless of race, creed or color. In 2020, a record number of Americans participated in the general election, entrusting their support and confidence for the office of the President of the United States and the individuals who now make up this 117th Congress.

That’s how our voices are best heard, by exercising the rights granted us by the bloodshed of countless American soldiers and the foresight of the founders of this great nation. Over the last four decades, I have witnessed many peaceful protests on Capitol grounds, as individuals freely and passionately stand for what they believe in. However, inciting violence at the Capitol, the very grounds where elected leaders gather to echo the voices of our home districts, is an un-American attack on the very foundation of our sovereign nation.
The 2020 presidential election was unlike any other. Uncertainty and a lack of confidence began to grow amongst voters across the country as some states made late changes to the election process, resulting in mounting reports of irregularities and election fraud. Postponed election audits and legal hearings have also led to valid questions about the integrity of this election that are still unresolved.
In fact, I received hundreds of calls and emails from people across southern and eastern Kentucky questioning the integrity of the presidential election in other states. Every American should have confidence in knowing that every fair vote is accurately counted. Therefore, on behalf of the people of Kentucky’s Fifth Congressional District, I am objecting to electoral votes tied to allegations of election fraud and voting irregularities in the 2020 presidential election.
One of the greatest signs of a healthy democracy is the peaceful transfer of power, including the process of certifying Electoral College results through a Joint Session of Congress, representing Americans from every state in the union. I love this institution and take great pride in echoing the voice of the people of Kentucky’s Fifth Congressional District. While I know that an objection will not likely change the course of this election, let it be a resounding echo of all Americans who want to restore confidence in a secure election process for a stronger nation.”   https://halrogers.house.gov

The Louisville Courier-Journal reports Rogers was the only member of Kentucky’s congressional delegation to vote against certifying the election results on Wednesday, in a session that took place hours after rioters supporting President Donald Trump breached the Capitol, forcing both chambers of Congress to go into recess amid a lockdown.