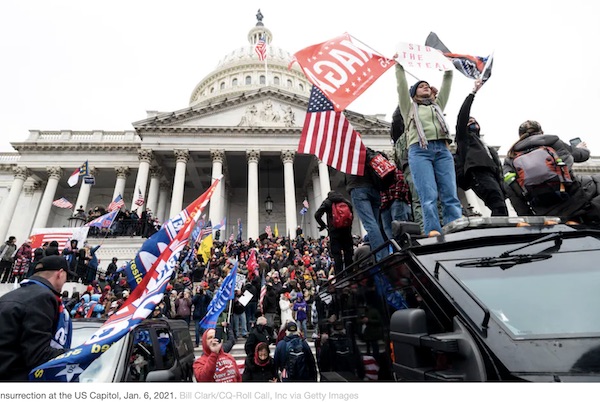 What happened at the U.S. Capitol Wednesday? A protest? A riot? A coup attempt? The choice of descriptions is important for journalists, and a memo from a John Daniszewski, vice president for standards at The Associated Press, provides valuable guidance. –Al Cross, director and professor, Institute for Rural Journalism and Community Issues

We are being questioned about the correct language to apply to the protesters backing President Donald Trump in Washington and the dramatic events taking place today at the U.S. Capitol.

AP style in the event of civil disturbances allows editors and journalists to choose the term that in their judgment best applies. So far, our main story has spoken of a “chaotic protest aimed at thwarting a peaceful transfer of power,” a “melee” and a “raucous, out-of-control scene.”

MOB, RIOT OR INSURRECTION OK: Considering that armed protesters broke into the building, overwhelmed Capitol police, interrupted the process of certifying Electoral College votes and forced the evacuation of the vice president of the United States and members of Congress, “protest” may be too mild a word for the action without surrounding it with strong adjectives and context, such as “violent protest” or “rioting protesters.” Calling it a “mob” or a “riot” would also be appropriate, especially when the protesters’ actions were wild, widespread, violent and uncontrolled. The term “insurrection,” meaning the act of rising up against established authority, could also be justified.

NOT A COUP: Some people and broadcasters are calling the protesters’ action a “coup” or a “coup attempt,” meaning a sudden, organized seizure of political power or an attempt by a faction or group to seize political power suddenly outside of the law. We may of course quote others alleging a coup or attempted coup, but so far AP has not seen conclusive evidence that the protesters’ specific aim was to take over the government, so at this stage we are avoiding the term in AP copy unless attributed.

As always, journalists should look at the events with an open and dispassionate mind and decide what language best applies. When in doubt, consult managers and senior news leadership.