Positive-test rate keeps going up, but Beshear says Ky. schools can safely open to in-person learning if they follow guidelines 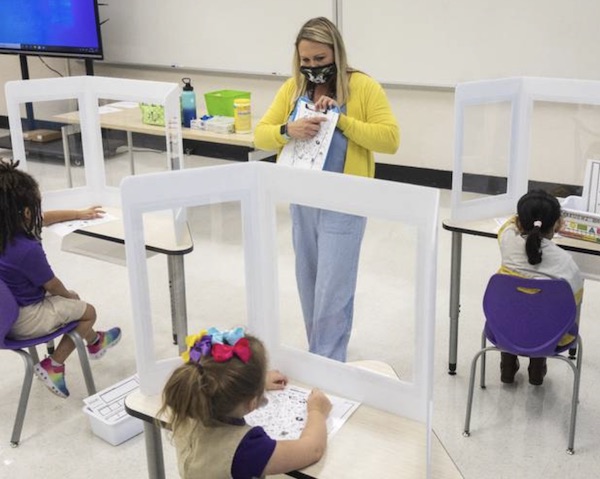 Even with the number of Kentuckians testing positive for the coronavirus rising steeply over the last week, Gov. Andy Beshear said Tuesday he believes Kentucky schools that follow the state guidelines will be safe to re-open to in-person classes on Jan. 11, as he recommended in mid-December.

“I believe on the 11th, which gives a little extra time to see what happened over the holidays and for people that develop symptoms to be tested and to be quarantined, the 11th will be safe for our schools to resume in person classes,” Beshear said at his regular pandemic briefing.

“If they meet all the requirements in the executive order and and follow all best practices, if they have reduced capacity in the facility, if they’ve provided an accommodation for all of the school personnel that fall into the danger zone, if they have true real virtual options for their students that gives real choice to families – I believe if all those things are done, based on some of the evolving research, then yes, it can be safe.”

Monday, Jan. 4, was the first day Kentucky schools were allowed to return to in-person classes, although Beshear recommended they wait an extra week as a way to minimize any possible increase in the spread of the virus that was expected from the holidays.

Beshear added that school districts will have to monitor what is happening in their communities and in their schools, and if things get bad they will have to adjust their plans. Further, he said it will be important for our educators to get vaccinated as quickly as possible.

He said he anticipates that teachers, who are in the next group to get the vaccine, along with first responders and anyone 70 or older, will be able to get it by Feb. 1. He said it’s impossible to say when the next phase will start because the state knows only a week in advance how many vaccines it will get.

WKYT-TV reports that some schools, including those in Estill County, returned to school at reduced capacity Monday. WAVE-TV provides a list of schools that began some version of in-person learning that day, as well as those planning to start Jan. 11 and beyond. The Lexington Herald-Leader reports that Fayette County Public Schools will remain in remote learning at least through Jan. 22 because of the high number of cases in Lexington.

Vaccines: Beshear reported that at least 66,582 vaccine doses have been administered in Kentucky, an increase of 6,168 since yesterday, when he called for an increased pace of vaccinations in long-term-care facilities and among health-care personnel.  Beshear said he would have a detailed report Thursday on vaccinations in long-term care.
He said the state is expected to receive an additional 53,800 vaccine doses next week: 27,300 from Pfizer Inc. and 26,500 from Moderna. Kentucky is also expected to receive 57,000 doses this week. These numbers do not include booster doses for people who have received an initial dose.
Beshear reminded Kentuckians that the current vaccines requires one dose and a booster three or four weeks later, depending on the vaccine.  He said the Centers for Disease Control and Prevention, the Food and Drug Administration and the manufacturers of the vaccines say you need two doses of the vaccine to achieve 95% immunity.
His comment stems from a recent debate from some public health experts who have suggested that the second dose of the vaccine should be delayed to allow them to use it to vaccinate more people. Last week, the United Kingdom made the decision to go ahead and provide a first dose of the vaccine to people even if there wasn’t enough to give them the booster within the recommended three to four weeks, The Washington Post reports.
Contact tracing: Mark Carter, who leads the state’s program to trace the contacts of people who have tested positive for the virus or been exposed to someone who has, said it continues to be important to follow all of the recommended public-health guidelines to minimize our risk of infection.

“I just want to emphasize that while we all are anxious to be vaccinated, and I include myself in that group, until we can be, we have to continue to do the things that we just sort of harp on in terms of wearing a mask, social distancing, getting tested if you feel sick, taking care of your hygiene, and participating in contact tracing,” Carter said. “And if we can do that, we’ll get to the vaccine and we’ll get through this pandemic.”

Carter estimated that the state’s more than 1,600 contact tracing staff – who work to make sure Kentuckians who test positive for the virus isolate and to ensure that those who are exposed quarantine – have proactively identified more than 90,000 Kentuckians who have either tested positive or been exposed to the virus, prevented more than 450 deaths and prevented more than 2,350 hospitalizations through their efforts. He also estimated that contact tracing prevented enough hospitalizations to save more than $31 million in health care costs.

Daily numbers: Beshear announced 1,781 new cases of the virus on Tuesday, bringing the seven-day rolling average of new cases down to 2,783 – about the average for the past month. Today’s number is 7.5% lower than the day before, when 2,319 new cases were reported.
The positive-test rate continues to trend up, at 11.36%, which is the highest rate yet since testing for the virus became widely available in May. Beshear called this rate “cause for concern,” but said it will take some time to determine what is causing such a high rate. He said yesterday that it could be high because fewer asymptomatic people have been tested in the past seven days due to the holidays, because many testing facilities have been closed or because of increased social gatherings.
“Coming out of the holidays, our numbers are wonky,” he said.
Hospitalizations from the virus increased by 44 since yesterday, to 1,781, which ties with Dec. 9 for the ninth largest daily figure. Of those, 430 are in intensive care and 215 of those are on ventilators.
The state reported 23 more deaths from the virus, bringing the state’s death toll to 2,772. Seven were from Pulaski County: five women, aged 84, 85, 89, 91 and 94, and two men, 63 and 97.
In other coronavirus news Tuesday:

Posted by Melissa Patrick at 8:52 PM