Louisa, Ky. — Coming off their first ever District Championship the Lawrence Co. Lady Bulldogs are ready to make that next step and become a threat in the 15th Region Tournament this season. 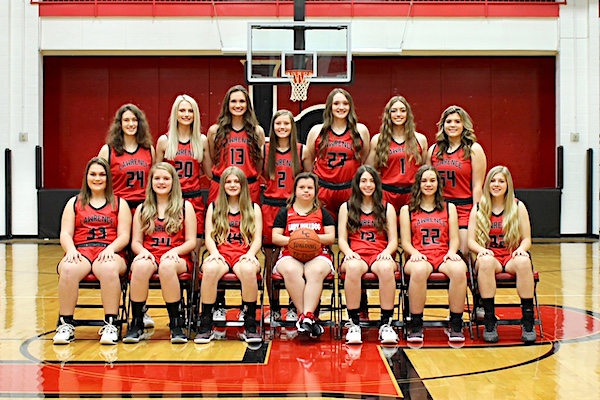 Back L to R Emmalee Holt, Brooke Neal, Kyleah Ward, Ellie Webb, Kaison Ward, Kensley Feltner, Abby Nelson.  Front L to R Tyra Hammond, Brylee Stafford, Madison Artrip, Manager Denet Wells, Sophie Adkins, Addison Bloomfield, Emily Artrip
They will open the season at home tonight against former 60th District rival Pike Co. Central at 6:00.
The Bulldogs went 19-14 and defeated Floyd Central 56-53 in overtime to win the 58th District Championship before falling in the first round of the 15th Region Tournament to eventual champion Pikeville 69-51.
The team lost 4 year starter Lexi Ratliff, who scored 14 points per game, to graduation which will be a big loss but the Lady Dawgs return everyone else and will look to make up for her loss from multiple players this season.
Do it all guard Kensley Feltner has established herself as one of the best players in the 15th Region even though she is only a sophomore. Feltner averaged 22 points and 9 rebounds per contest which were both team highs, she also made 189 free throws and 19 three pointers.
Sophomore Brooke Neal scored 8 points per game and hit 61 three pointers, Freshman Kaison Ward scored 4 points and 7 rebounds per game, both are expected to contribute more this season. Lone Senior Ellie Webb made 27 three pointers last year and will be counted on as well. Juniors Kyleah Ward and Tyra Hammond along with Freshman Abby Nelson will be big in the front court this season.
The Lady Dawgs are scheduled to open the season with five straight home games. Tonight against Pike Co. Central, Thursday East Carter, Saturday Hazard, Monday Shelby Valley, Tuesday Magoffin Co. before hitting the road for the first time at Pike Co. Central on Friday January 15th.
2020-2021 Roster
#2 Senior Ellie Webb 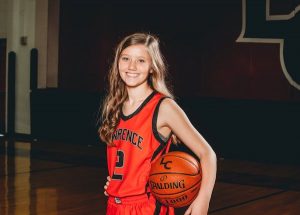 #13 Junior Kyleah Ward
#33 Junior Tyra Hammond
#20 Sophomore Brooke Neal
#1 Sophomore Kensley Feltner
#24 Sophomore Emmalee Holt
#23 Freshman Kaison Ward
#54 Freshman Abby Nelson
#12 8th Grader Sophie Adkins
#32 8th Grader Emily Artrip
#22 8th Grader Addison Bloomfield
#14 7th Grader Madison Artrip
#34 7th Grader Brylee Stafford
Lawrence Co. Head Coach Melinda Feltner
COACH’S COMMENTS
“…We lost one senior from last year in Lexi Ratliff. She’s a huge loss, she was just so consistent as a player. You knew what you were going to get out of her every game, she was always going to get you 12 to 15 points, so you could depend on that and the girls were comfortable with her. Losing leadership was one of those things that will take us a little bit of time to get over. We couldn’t play through the summer to adapt without her on the court. We miss her greatly but we are going to have to rely on two guards to make up for her scoring. We think we have that with Ellie, Brooke, and Sophie Adkins those three can help make up her 15 points between them. We hope they can give us more but whatever they give it will take some of the pressure off Kensley. We hope to spread it around.”
“… It’s been really nice having a lot of the same girls back because they already know what we are running because we are basically running the same things and so they have been able to just come in and start where we left off last year. What happened in the spring and the summer was very disappointing and not being able to scrimmage, but we are very thankful to be here in the gym every day and that is what we talk about every day. It’s just another opportunity for us to be here and get better and make each other better. The girls are gelling and coming together, some of those things that happen with summer ball are happening now. They have been able to come in and fill those spots and be comfortable with what we are going to put on the floor Monday against Pike Co. Central.”
“…They had worked and worked and were probably in the best shape before the first stoppage. Even better than last year and then it’s like what do we do now? The first week coming back was hard. It took them a little bit to get their feet wet and mentally I think they were discouraged because what had happened. I try to put myself in their spots as a 15,16-, 17- and 18-year-old kid who has had so many things jerked from them. Mentally getting them prepared and we have just talked about that. Every day is an opportunity that we are here and let’s do the best we can with it. That’s really helped. We look at weekly goals. We know we want District and Regional titles and those are things we are working for but right now they know we have to go weekly and take advantage of every opportunity we have.”
“ Our Starting five will change throughout the entire season. It’s not going to be a solid and this is who we are going to have. I don’t want to leave the Ward sisters out but they will be huge for us. We have run a lot of sets through them this year to utilize our height. It’s something we did not do enough of last year and we also have Tyra Hammond and Abby Nelson for our rotation. Emmalee Holt has been able to come in and help us some, too. Those are the eight kids we are going to be trying to run this thing through.”
“… We had that original schedule and then we had to fix it all over once again. We are going to lose a couple of WV schools because of their postponed start date. So, we have to find Kentucky teams to fill in there. I think it is going to be a weekly juggle to figure out who you’re playing. I am an organized person so this is even taking me out of my comfort zone. I have had to make multiple schedules. I like to be very prepared so this has been tough.”
“…We want to play Shelby Valley because they have the best player in the Region, Cassidy Rowe who is committed to Kentucky, She is supposed to be back full force and we want to play against that high talented player to see where we are at. Pikeville is still going to have those guards and good post player on the inside that killed us in the Region last year. Johnson Central will also have two good guards back. They are seniors and veteran guards. Those three teams are going to be tough and then Floyd Central we are always going to be battling with them. But beyond that I don’t think there is any clear cut favorite right now. It could be any four or five teams. Once the season starts someone will emerge about February. I think early on it’s going to take some people just because there is some many different people. Pikeville lost five seniors. Johnson Central has those two seniors but they just got one back so I think it will be interesting here in the beginning and then of course Martin County has some kids we don’t know anything about. It could be a toss-up for the first little bit to see. We are excited and ready for the challenge and to not have to scrimmage against each other.”
ShareTweetShareSendPinShare
Next Post