GROWING UP IN LOUISA: Coincidence

We, like many families have limited our visits with others during this great pandemic in hopes we might skip catching the dreaded virus that has so quickly attacked the world’s population. True, many families have been spared the illness but others have suffered greatly. I don’t know why some have made it through and others that were apparently healthy, did not. Even members of the same people group have been affected differently. While thinking about this puzzle my old mind wandered down another rabbit trail only to discover that strange coincidences, or god-winks, have followed me around for years. 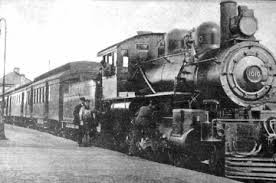 I have written several articles in which I described living next to, or just within a block or so of the C&O railroad. I played on and explored all around those tracks as a youth picking up unusual prize rocks of various colors. Some were chinks left over from the impurities of burning coal, apparently falling from the steam engines.

I learned to walk on a rail even when I was so clumsy that keeping a straight line wasn’t easy. I held contests with myself to see how far I could walk on the thin rail without falling off. At first I made it a block, then two blocks, but I never did walk very far without becoming distracted either by the sound of a train approaching, a friend joining me, or something reminding me of what I was supposed to be doing instead. Waking up to reality was not a shock for me because it happened all the time. I remember once when walking the rails my mind went off into a daydream not dissimilar to ‘Alice in Wonderland,’ although I don’t recall a ‘Jaberwocky.’ My daydreams were more upbeat and happier. I felt no urge to escape and find my way home, but alas, I always did.

I had to learn to ride my bike over the grade crossings for the gap seemed too ready to grab my front wheel and send me spilling hard onto the ground. Little pieces of gravel would bury itself in my hands, knees and elbows causing enough pain to cancel any thoughts my brain had encountered. Mom took tweezers and removed the small rocks still stuck under the skin. I remember that she had some red mercurochrome to paint my wounds, but there were times when I had to face the dreaded alcohol, which was known to hurt more than the original bike wreck. 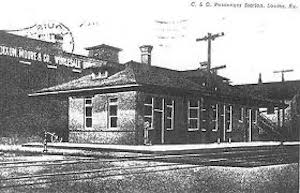 Still, I loved to watch the trains coming and going. There were two passenger trains a day that stopped at our little depot. I often met those to hand over some mail to the postal clerk that worked out of the mail car. The big black steam engines would sit there emitting sounds as if the metal was expanding from the hot fire kept by the fireman. Steam would rise making a cloud that would envelope nearly the whole front of the platform. Finally, the conductor waved a lantern telling the engineer all passengers were aboard and the train could pull out. My favorite time was when the big drive wheels would slip and spin briefly until they caught good hold of the slick tracks.

There were many more coal trains that would come through town from the south. The coal cars were heaped with big blocks of black coal, and sometimes with piles of what looked to be a black shale-like product that was perhaps the same but crushed by heavy equipment. Empty trains came from the north which meant they were needed by the mines to fill once again. While I rarely got a glimpse of the coal mines, I had heard stories about the mining towns. I had no pictures of the industrial areas up the line that I thought would use the coal for fuel for manufacturing. It was later, just after I moved to Virginia that I discovered the truth. The coal piers at the end of the line were located in Newport News, Virginia. 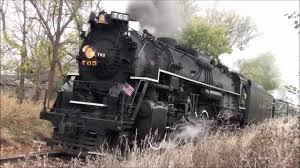 Even though I came to work near those coal piers and watched the coal cars being unloaded into the holds of some big ships, I didn’t connect the dots. These colliers traveled all over the world fueling the industrial revolution from those early days when I was walking the rails, until even today. Over the years I have lived within a mile of this mainline and even today can walk to the grade crossing I must use to travel anywhere.

The coincidence is that those same coal trains that I knew as a child still continue to pass my house even today! Granted, they are not steam engines any more, but otherwise, when sitting at the crossing waiting for them to go by, a bit of Kentucky is passing right in front of me. What was the mighty C&O, that once employed one of my uncles as a design engineer, and another as a ‘company doctor,’ now somehow reminds me of home. They pass nearly every hour throughout the days and nights. It is not the lonesome sound I once felt, or quite the one Johnny Cash sang about. Rather it is a sound I’ve known all my life. In a way, it is the sound of home.