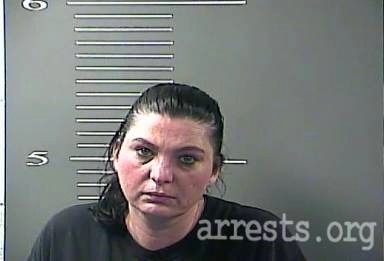 APRIL L. MEEKS, 40, OF LOUISA, WAS ARRESTED IN ASHLAND, KY. ON DECEMBER 11, FOR REPEATEDLY STABBING HER BOYFRIEND.

A Lawrence County woman was arrested and is still in jail custody in Boyd County after she stabbed her boyfriend on December 11 during an argument over alleged infidelity, according to court records of the arrest report.

The Ashland Police Department said April L. Meeks, 40, of Louisa, stabbed her boyfriend in the chest multiple times with a 6-inch knife.

According to the police arrest citation report, on Friday, December 11, just after 6:00 P.M., a male victim showed up at the King’s Daughter Medical Center emergency room with several stab wounds. Officers in the police report described as uncooperative, the victim told them he was stabbed after picking up a hitchhiker, invoking the villain of countless urban legends.

At 9:30 P.M., Ashland Police officers were dispatched to the Ashland Inn motel for reports of a man and a woman in an argument. Arrest records show police found April Meeks across the street crying inside the bathroom at Captain D’s restaurant.

April Meeks told officers she had run there to hide after her boyfriend had chased her, according to the police arrest report.

That is when April Meeks told the police officers she had stabbed her boyfriend earlier in the evening, according to court records.

The victim ultimately told police he had been stabbed during an argument in which April Meeks accused him of cheating, arrest records show. He then took officers to the bloody room and turned over the knife with which April Meeks stabbed him, according to police.

April Meeks was arrested and charged with *ASSAULT, 2ND DEGREE, a class C felony punishable with from between 5 to 10 years in prison. April Meeks is currently being held at the Boyd County Detention Center in Catlettsburg on a $5,000 full cash only bond.

This violent incident is the latest criminal trouble in 2020 for April Meeks, who is also currently facing charges in Lawrence County, as result of her arrest on June 3 of this year by sergeant Steven Wilburn, of the Louisa Police Department, on heroin, meth and marijuana trafficking charges, along with drug paraphernalia and no auto insurance charges, and also a driving under influence charge. April Meeks was arrested again on October 5 in relation to her June crime bust case, for failing to appear in court on those charges. April Meeks has two other arrest cases in Lawrence County; a July 2007 arrest for misdemeanor 3rd degree terroristic threatening, and a March 2016 arrest for misdemeanor 4th degree domestic assault.

Note, this case is only now getting attention after it happened over 11 days ago, and is still limited what is informed for the public, due to the Boyd County Detention Center (along with other county jails & detention centers in Kentucky) no longer having informative websites for their jails after intentionally dropping them and now are offline during  the last few months.

JORDAN CENTER HAS 20 NEW CASES OF COVID-19 IN ONE DAY, LAWRENCE CO. HAS THIRTY TOTAL