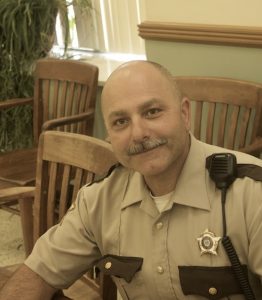 Auditing standards require the auditor’s letter to communicate whether the financial statement
presents fairly the receipts, disbursements and excess fees of the Lawrence County Sheriff in
accordance with accounting principles generally accepted in the United States of America. The
sheriff’s financial statement did not follow this format. However, the sheriff’s financial statement
is fairly presented in conformity with the regulatory basis of accounting, which is an acceptable
reporting methodology. This reporting methodology is followed for all 120 sheriff audits in
Kentucky.

As part of the audit process, the auditor must comment on noncompliance with laws, regulations,
contracts, and grants. The auditor must also comment on material weaknesses involving the
internal control over financial operations and reporting.

The sheriff’s office does not have adequate segregation of duties:

The sheriff’s office does not have adequate segregation of duties and internal controls over receipts and disbursements. The sheriff’s bookkeeper collected payments from customers, recorded transactions in the ledgers, prepared deposits, and reconciled the bank account. Without internal controls in place, there is no
way to know that financial information is accurate. Internal controls should be implemented and
duties should be segregated to decrease the risk of misappropriation of assets, errors, and
inaccurate financial reporting to external agencies. By not segregating these duties, there is an
increased risk of undetected misappropriation of assets either by error or fraud.

Internal control duties should be segregated to decrease the risk of misappropriation of assets,
undetected errors, and inaccurate financial reporting to external agencies. Compensating controls
such as comparing the daily checkout sheet to the receipts ledger and the bank deposit can be
implemented to decrease the risk present in the absence of proper segregation of duties, however
compensating controls do not eliminate the lack of adequate segregation of duties.

We recommend the sheriff’s office implement internal controls and segregate duties as much as
possible. Employees receiving payments and preparing deposits should not post to the receipts
ledger or prepare bank reconciliations. Employees preparing and signing checks should not post
to the disbursements ledger and prepare bank reconciliations. A proper segregation of duties may
not be possible with a limited number of employees. In that case, the sheriff could take on the
responsibility of preparing or reviewing the daily deposits, receipts and disbursements ledgers,
monthly reports, and bank reconciliations. These reviews must be documented in a way that
indicates what was reviewed, by whom, and when.

Sheriff’s Response: We segregate job responsibilities as much as possible, due to a limited staff
it is not always possible. The clerk prepares the daily checkout sheets. The office manager then
enters it into the ledger and prepares the deposit slips. I have started reviewing the daily deposit
tickets, daily checkout sheets, bank statements, bank reconciliations and monthly reports. I then
initial and date showing they have been reviewed.

The sheriff’s responsibilities include collecting property taxes, providing law enforcement and
performing services for the county fiscal court and courts of justice. The sheriff’s office is
funded through statutory commissions and fees collected in conjunction with these duties.
The audit report can be found on the auditor’s website.