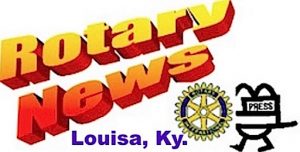 The Lawrence County Rotary Club had their weekly meeting, December 17th via Zoom once again following state orders on public meetings.  Guest speaker this week was Casey Parker-Bell, a lifelong Kentuckian who has worked as a reporter and producer for KET since 2015.

Before working in journalism, Casey was a project manager working construction in western Kentucky and attended the University of Kentucky, majoring in business. A decision to change careers led him back to UK

and he graduated with a degree in broadcast journalism in December 2015. He won the Associated Press award for Best College Newscast, the first University of Kentucky student ever to do so.

It was the opportunity to tell other’s stories and get out from behind a desk that led him to reporting.

At KET, Casey covers the Kentucky General Assembly. He spends most days during the legislative session sitting in the Senate Chamber, watching and reporting on the proceedings. He is the anchor of the weeknight news update “Kentucky Headlines” and is the producer of “Comment on Kentucky.”

During his time at KET he, along with his colleagues, has been nominated for Emmy Awards for election coverage and documentary production. Casey said since Covid resources used by teachers have increased 234% with 750,000 views of KET produced content.

There will also be a new program “Let’s Learn that will be on Monday through Friday at 2:00 pm.  This will be things that students can do with their parents that doesn’t require being behind a computer, something that is more active.

FACES OF HOPE: WE DO RECOVER, Aisian Lucas' story...Completely Restored