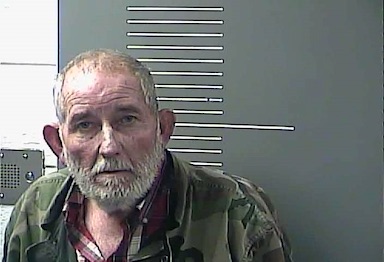 SAMUEL MCCOY, 71, OF FLAT GAP, GOT JAILED SATURDAY EVENING, AFTER FIRING GUN AT HIS NEIGHBORS OVER DISPUTE OVER AN ANIMAL GETTING SPOOKED.

A Johnson County senior citizen in major legal trouble, after he got jailed mid-Thanksgiving weekend after he pointed a gun and opened fire with the gun at his neighbors due to what was essentially a minor spat.

According to a press release of the arrest citation report, on early Saturday evening, November 28, the Johnson County Sheriff Department received a call about shots fired at a family in the Flat Gap area.

When Johnson County Sheriff Department deputy Jeffrey Castle made contact with the Flat Gap family, who said their daughter and a friend were riding side-by-side ATV on their property, when they said their neighbor, Samuel McCoy, 71, pointed a gun at them, saying they were scaring his horse. The girl’s parents then went to find out what was going on, and when they came near Sameul McCoy’s residence, that is when they claimed he allegedly fired his gun at their truck.

When deputy Castle went to Samuel McCoys’s home to investigate and when deputy Castle made contact began speaking to Mr. McCoy, that is when he allegedly told deputy Castle that he could shoot anyone who came on his property, including deputy Castle, and then allegedly said he would kill a bunch of people and save the last bullet for himself.

After telling Mr. McCoy he was under arrest, and after a brief struggle with Samel McCoy who tried to walk away and to pull away from being placed in handcuffs, deputy Jeffrey Castle took Samuel McCoy into custody, and he was charged with:

Samel McCoy was transported to and was lodged in the Big Sandy Regional Detention Center in Paintsville; where he still remains jailed, with his bond set at $10,025.