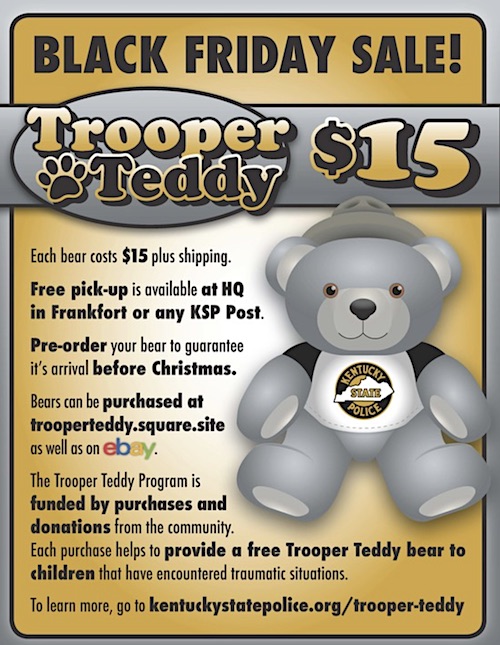 FRANKFORT, Ky. (Nov. 23, 2020) — It’s nearly Black Friday and the Kentucky State Police (KSP) hope shoppers will include a Trooper Teddy Bear on their Christmas list this year. The bears go on sale Thanksgiving night at 6 p.m. and will sell for $15 through the holiday weekend. All proceeds from the sale benefit the Trooper Teddy Project, which provides teddy bears to children in traumatic situations such as a car crash, exposure to drugs, or domestic abuse cases which frequently result in the arrest of a parent.

“Often times, we are meeting these children on their worst day,” says Gregory. “Whether they are scared or nervous from the circumstance they are dealing with, the bear seems to immediately resonate with them. That connection builds trust and opens the door to communication between the child and the trooper.”

Gregory says the program does not utilize state dollars and relies solely on donations and the sale of bears to sustain it.

“Annually, we host a bear sale on Black Friday and then again on Valentine’s Day to raise money for the project,” notes Gregory. “We also accept general tax-exempt monetary donations to the project. We remain humbled by the public support for this project. It’s absolutely heart-warming to see the way Kentuckians respond.”

Trooper Teddy Bears will be sold for $15 plus shipping during the promotion. Citizens have the option to pick it up their bear for free at KSP Headquarters in Frankfort or at any KSP Post.

For those interested in purchasing a bear or making a tax deductible contribution to the project, citizens should visit https://trooperteddy.square.site/s/shop or shop through Ebay at https://www.ebay.com/itm/KSP-TROOPER-TEDDY-BEAR/223858694990?hash=item341f049b4e:g:nu0AAOSw4iVfV7cl.