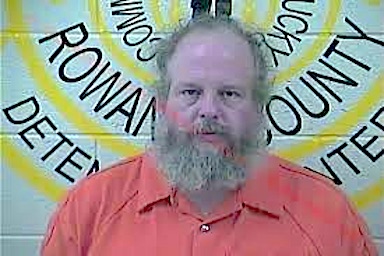 A federal grand jury in Ashland, Kentucky has issued an indictment against an Elliott County man accused of torturing two female children in a remote area.

Ronald Patrick Stinespring, 49, of Sandy Hook, Ky., was arrested on March 2, 2019 on multiple sexual and criminal abuse charges, amidst allegations that he had tied one of the female victims up and shocked her feet with a stun gun made from a flashlight

One of the female juvenile victims was able to break free and alert a neighbor, which led to the Kentucky State Police wound up rescuing the other victim and took Stinespring along with his wife, Ty Stinespring, 46, whose address was listed as being from Cadiz, Ohio; into custody.

Two other family members were charged in the incident, Devon Stinespring, who was age 18, and from Cadiz, Ohio, who was arrested March 1, 2019; and Desi Stinespring, who also was 18 at the time of her arrest on March 2, 2019, who lived in Sandy Hook, Kentucky,

However, both of the Stinespring teenagers have since had their charges dropped earlier this year.

While not much followed after the initial arrest and announcement by Kentucky State Police in March 2019, the case had garnered attention in the Cadiz, Ohio, area due to the fact that Ty Stinespring was an elementary school teacher of 18 years in that area, according to the Harrison News Herald, in Harrison County, Ohio.

According to the newspaper Ronald Stinespring, the husband of former Harrison Hills school teacher Ty Stinespring, was hit with two additional felony charges while appearing in an Elliott County, Kentucky courtroom in February 2020.

Ronald Stinespring, who was reportedly facing 48 criminal counts, of which most are felony charges, saw the charge of rape and sodomy added to his list. Both are first degree felonies for a victim under 12 years of age.

Ty Stinespring also appeared but nothing had changed in her case, where she faces two counts of complicity to criminal abuse. Both are felonies of the first degree “by intentionally abusing a child of whom she had custody to be abused, causing them to suffer torture, cruel confinement, and cruel punishment in complicity with another,” according to the indictment.

Also revealed at the February 2020 hearing was that the state police crime forensic analysis had been completed, but no further details were released.

Also, a motion to separate the two defendants for trial had still not been decided and no indication was given as to when that decision would be handed down. The next scheduled court appearance at that time for both of the Stinesprings was March 9, 2020, at 11 a.m. in Elliott County court.

On Wednesday, November 18, 2020, Ronald Stinespring’s case took another turn, when a federal grand jury in Ashland, Ky. issued a two-count indictment charging him with coercing a minor to make sexually explicit images in September 2018 and for alleged child pornography found at his home at the time of the arrest in March 2019.

At the time of Ronald Stinespring’s arrest, Kentucky State Police said that federal law enforcement officials were looking into Stinespring for possible weapons and explosives violations.

If convicted on the new federal charges, Ronald Stinespring could face up to 30 years in federal prison.

Federal court records do not show his wife Ty Stinespring facing federal charges at this time.

Both Stinespring’s are due back in court in Elliott County for their state charges on December 14 for a pretrial hearing.

Ronald Stinespring is being held on a $500,000 full cash bond only, and he remains incarcerated at the Rowan County Detention Center in Morehead, Kentucky. Ty Stinespring was given a $15,000 cash bond and was able to post her 10 percent, and she was released last year.