GROWING UP IN LOUISA: Cooked Apples

I have to explain to the reader that when I got up the other morning, and for that matter, on the mornings since, that I have had to endure a mouthwatering smell that permeates my house. It awakens memories of a lifetime of fall cooking. You see, my wife Suzie and I visited an orchard up in the mountains last week and came away with several bushels of mixed apples. I thought they were meant to feed us over the upcoming winter, but she had better ideas. There were crockpots spread around the kitchen that were full of various kinds of wonderful products. These included apple sauce, apple butter, cooked apples, and apple syrup. She has already made some pumpkin pancakes and drenched them with fresh apple syrup. Somewhere along the line if I behave, I’m hoping to taste some fried apple pies. That’s good eating, folks!

What a way to wake up to a new day! The smell of bacon or fried ham cooking, or maybe some sausage is enough to stir up all kinds of childhood memories. I was lucky enough when I was growing up to have a variety of things to eat for breakfast whether at home or when staying with friends or relatives. Frankly, what my mom fixed was a wonderful table of goodies, sometimes with homemade cinnamon buns that were 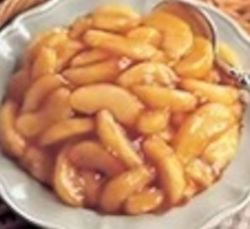 dripping with melted butter and covered with glazed honey. By no means was this a steady diet of mine. In fact, most of what I had to eat on a daily basis was hot oatmeal, buttered toast, or a dry cereal that was made in a place called ‘Battle Creek.’ I also made what we called ‘toast and milk,’ which was merely a slice or tow of bread that had been buttered and toasted under a broiler so that only one side was crisp. I then placed the toast into a bowl and sprinkled sugar or cinnamon sugar over it and added some milk. Yum!

On a good day mom would make some sausage gravy that would be poured over some fresh, hot biscuits. Next to that on my plate she had placed some fried eggs and some sausage patties. A cold glass of milk was provided to wash it down. Sometimes cooked apples or apple butter would be served instead of the meaty gravy. Biscuits and homemade jelly was another treat. While this all sounds like a lot, it truly wasn’t every day that we ate like this. Usually, it was for company that were overnight visitors, so on normal days I might have the toast and milk or dry cereals already mentioned. I think I liked ‘Cheery O’s’ and Wheaties the best. I sometimes had Ovaltine that was suggested by one of my favorite radio programs. After all, I needed the box tops to send off for a mystery decoding ring.

One of the first times I was actually an overnight guest was when mom and I visited my Great Aunt Barbra Walters. She lived with her husband, John, and a parcel of kids on a dairy farm on the edge of Catlettsburg, KY. Shortly after we all pitched in and finished the early morning milking we got a large bucket of the still warm milk and carried it to the house to be cooled down. I would enjoy drinking it at the massive table. The cream floated on the top and was so good!

I remember my aunt frying bacon on her new range that had recently replaced a wood-burning cook stove. This one was fired by natural gas. I remember the bacon grease popping on the skillet. My aunt skillfully avoided being hit by the hot, melting grease. Even if she was one of the best, she sometimes got burned on one of her bare arms. Knowing this was part of life she just adjusted the temperature and pressed on. I remember the stacks of pancakes that were awash with hot syrup she had made just earlier that morning. It was years later when I was staying with friends in Bar Harbor, Maine, that I was served freshly picked blueberries added to some pancakes. We had some real maple syrup cooked down by one of their neighbors.

I remember some of the breakfasts served to me at church camps and later at band camps with piles of scrambled eggs. The cooks showed me how to make those and to make omelets, too. At the breakfast buffet I was able to take a whole wad of crispy fried bacon and a pile of some little sausage links. I ate until I could hold no more. 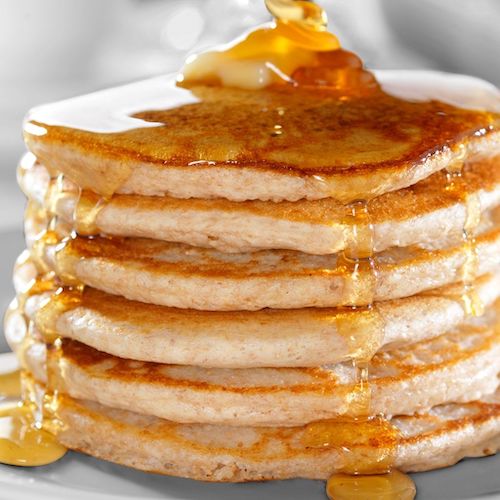 One time when I was in high school one of the teachers from school invited me home to spend the night. Mr. John Pennington from Webbville invited me to visit him and his wife. We rode a yellow school bus to his home from school. After arriving and meeting his beloved wife Mr. Pennington took me to play some baseball with some local boys. The field was just below his house. Soon enough the dinner bell rang and we were obliged to climb back up the hill for supper. Later, after nightfall, I was shown to a nicely decorated guest room that had a bed made up for me. I was not used to what I thought were very ‘plush’ arrangements. The bed had two sheets, soft pillows everywhere, and a warm quilt to set things right for a deep sleep. After a restful night the bell rang again. I jumped out of the warm cocoon that I had already learned to accept as a new ‘normal.’ I thought it was all too easy to grow accustomed to such luxury.

Not only did Mrs. Pennington serve up some wonderful pancakes, eggs, and biscuits, but she included some cold milk. Then to my surprise, I was given a choice of several kinds of Battle Creek fare, (store-bought cereals) galore. Mr. Pennington and I had to rush so we would not miss the bus back to town, but I wanted so much to linger at the wonderful table so generously provided. I had seen a little of how the other world lives, so to speak, and it was great!

When one thinks of the varieties of food for meals our thoughts tend to focus on those served formally at the evening table. We hardly ever think of breakfast or lunch, even if those meals were common. We forget about peanut butter and jelly sandwiches, soups, or the more common meals normally served for lunch. Also, breakfast fare seldom comes to mind like those big family dinners around holidays. The thing is that all of these meals kept us growing and glowing over the years. I think it was the breakfast table that made a real difference. Our families celebrated some grand flavors and made some really great choices that even today teased our pallets and prepare us for the day ahead.

A family that pays careful attention in planning the breakfasts ahead for the week win my vote as wise folks. They certainly win my gratitude. Just as my Suzie continues to put up jars of apple butter and other treats, I know I am blessed. The memories of those meals I think are worth keeping and sharing with others. For you my dear readers, I wish you ‘bon appétit!’

Dawgs will have to wait extra week to begin postseason play